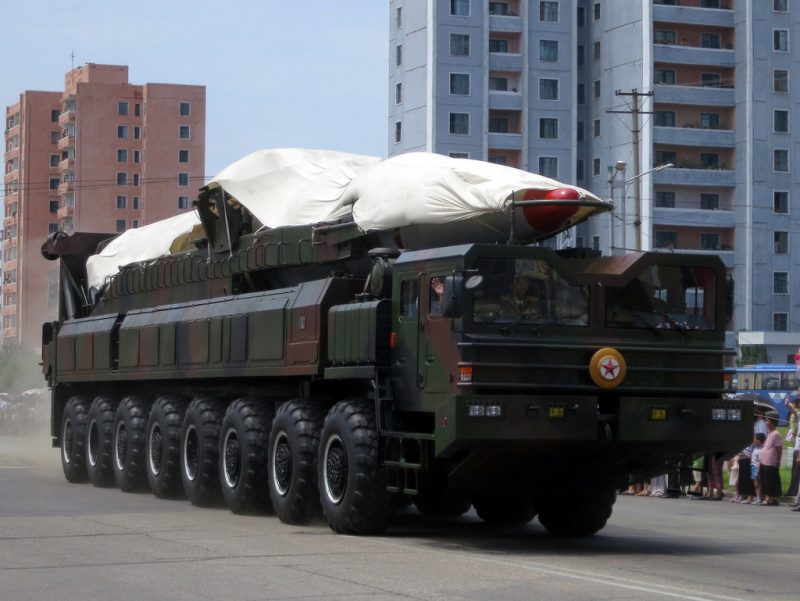 North Korea is reported to be shipping chemical weapons to Syria. The United Nations Security Council (UNSC) has stated that activity has been intercepted during the past six months and that North Korea is also shipping conventional weapons there. Furthermore, a Syrian government entity, the Scientific Studies and Research Centre, has apparently established cooperation with the Korean Mining Development Trading Corporation (KOMID), North Korea’s key arms exporter, and blacklisted by the UN Security Council

Shipping weapons and chemical weapons to Syria brings cash-strapped North Korea hard currency, Meanwhile Syria, thick in a civil war, can only acquire sophisticated weapons and weapons of mass destruction through a black market; so a sanctioned North Korea is ideal.

This news should not come as a surprise. North Korean support for Syria is nothing new. In 1995, a CIA report confirmed that Syria’s Scud B and Scud C missile systems had been acquired from North Korea. By 1997, a State Department report confirmed that North Korea was providing Syria with crucial equipment for its missile development program. Der Spiegel reported in 2015 that Syria was again trying to build nuclear bombs.

A nuclear reactor being built by North Korea in Syria was destroyed by Israel in 2007. In 2012, North Korea was sending Syria artillery components through China while using sophisticated techniques to avoid interception.

In April 2017, Kim Jong-un called a US missile strike on Syria, in response to Syrian use of chemical weapons on its own citizens, an “unforgivable act of aggression.” North Korea’s aid to Syria in developing chemical weapons, however, is also nothing new.

Lately, North Korea has again been providing Syria with chemical weapons as well as assisting its ballistic missile program.

All these activities have been carried out despite the Iran, North Korea and Syria Non-proliferation Act, which “authorizes the United States to impose sanctions against foreign individuals, private entities, and governments that engage in proliferation activities.”

North Korea’s nuclear and ballistic missile programs have been both alarming the US and destabilizing the Middle East.

Syrian forces have used these chemical weapons against rebel forces and civilians; the main delivery systems for chemical warheads have been artillery rockets, ballistic missiles and aerial bombs.

Syria’s chemical weapons stockpile still exists, despite the country acceding to the Chemical Weapons Convention (CWC) in 2013. Syria’s agreement to the CWC is most likely why it has been seeking chemical weapons clandestinely.

Although Syria is also a party to the Nuclear Non Proliferation Treaty (NPT), it could just as easily clandestinely acquire nuclear weapons from the black market rather than build nuclear program that would be easily detectable by satellites.

To add to this, Russia has vetoed renewing the mandate of the Joint Investigative Mechanism (JIM) due to have expired in November 2017. The JIM, a mechanism of the United Nations and the Organisation for the Prohibition of Chemical Weapons under UN Resolution 2235, set up in the year 2015, aimed at determining the perpetrators of chemical weapons attacks in Syria.

In the past, North Korea has shipped ballistic missiles to Hezbollah and Hamas via Syria; they will probably continue to do so, and to terrorist organizations as well.

Debalina Ghoshal, an independent consultant specializing in nuclear and missile issues, is based in India.

Loading...
Newer Post
Israeli Attack Tests Iranian Missile Defense Capabilities in Syria
Older Post
Look What Putin is Doing to Britain – How Could We Not Choke His Economy?