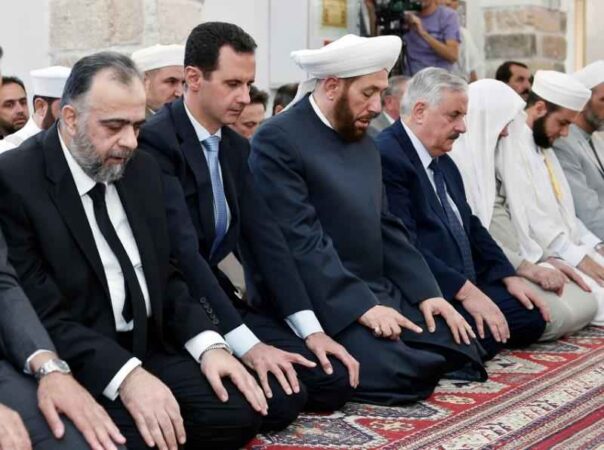 The global chemical weapons watchdog criticized Syria for failing to declare a chemical weapons production facility and respond to 18 other issues. Meanwhile, Russia stood by the Assad regime for violating the Chemical Weapons Convention Syria signed in 2013. The Assad chemical program is alive and well.

The clash Friday came at the U.N. Security Council’s monthly meeting on Syria’s chemical weapons, where the director-general of the Organization for the Prohibition of Chemical Weapons, Fernando Arias, briefed members for the first time since May. After the briefing, Russia’s U.N. Ambassador Vassily Nebenzia pummeled him with questions.

Arias said seven years after Syria joined the Chemical Weapons Convention in 2013, its initial chemical declaration has unresolved “gaps, inconsistencies, and discrepancies”. He added that it “still cannot be considered accurate and complete.”

He told the virtual meeting that one of the 19 outstanding issues is a chemical weapons production facility that Assad said he never used to produce weapons. At the same time, the OPCW gathered material and samples indicating “that production and/or weaponization of chemical warfare nerve agents took place.”

Arias said the OPCW had requested Syria to declare the exact types and quantities of chemical agents at the site. It received no response.

Britain’s new U.N. ambassador, Barbara Woodward, said another unresolved issue in Syria’s declaration is the thousands of munitions and hundreds of tons of chemical agents that Syria has not accounted for.

A joint U.N.-OPCW investigative mechanism accused Syria of using chlorine and the nerve agent sarin during its civil war. Simultaneously, the global community accused the Islamic State group of using mustard gas twice in 2015 and 2016.

In April this year, an OPCW investigation blamed the Syrian air force for a series of chemical attacks using sarin and chlorine in late March 2017 on the central town of Latamneh. Arias said in late October that Syria failed to meet a 90-day deadline set in July to declare the weapons the Assad regime used in the attacks on Latamneh. Or to disclose its chemical stocks.

France, backed by over 40 countries, has proposed that the OPCW suspend Syria’s “rights and privileges,” which would include its voting rights in the OPCW, for failing to meet the July deadline. The OPCW’s 193 member states will likely take up the proposal at their spring 2021 meeting.

Nebenzia posed eight detailed questions to Arias, alleging the OPCW used double standards, didn’t maintain the “chain of custody” of evidence, and attempted “to turn a blind eye” to 200 tons of chemical weapons precursors missing in Libya “while in parallel pressuring Syria to explain the `disappearance’ of even tiny amounts o chemical substances.” He also questioned why concerns by inspectors allegedly weren’t considered by the OPCW.

Arias responded in a closed session after the open meeting, so his answers were not made public.

Before the meeting, council members Britain, France, Germany, Belgium and Estonia along with Ireland and Norway, which are joining the council on Jan. 1, issued a joint statement expressing “full support to the OPCW” and to Arias.

The seven European nations backed action against Syria for the attacks on Latamneh and stressed their support for efforts to collect evidence of violations of human rights, international humanitarian law and abuses “with a view to future legal action.”

Germany’s U.N. Ambassador Christoph Heusgen accused Russia of “undermining the OPCW” but he told the council it has failed because the organization remains strong and respected.

Ya, right! Russia to encourage Assad to come clean is as probable as a square moon.