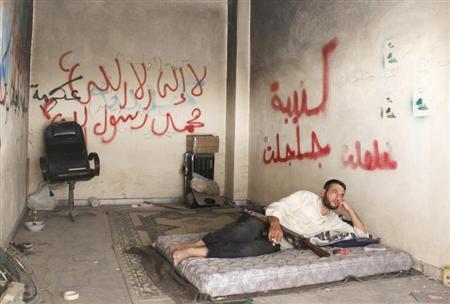 Several Russian-designed Konkurs anti-tank weapons were used in a rebel attack this week on an army position in Deraa city near the Jordanian border, said a source in a rebel brigade linked to the Western-backed Supreme Military Council.

Missiles were also fired around Laja, a rebel stronghold in the rugged region stretching north to the outskirts of Damascus, according to Faiq al Aboud, a member of the Al-Mutasem Bi’Allah brigade whose account was corroborated by other fighters.

The recent flow of Saudi-backed arms reflects concerns in Riyadh at the slow pace of progress by rebels in the south and concern that al Qaeda-linked groups could exploit the stalemate to expand their presence, said a Western diplomatic source.

Rebels have faced a series of setbacks in central Syria as Assad’s troops retook towns and city districts with support from Iran and Lebanese Hezbollah fighters.

The army has also consolidated its presence in towns across southern Syria – which has always had strong military presence because of its proximity to the Israeli-occupied Golan Heights – after rebels made significant gains in the region.

Rebels and military experts say the Konkurs, with a range of four km (2.5 miles), offers a strategic edge over Assad’s better equipped forces which rely on hundreds of Russian T-72 tanks and older models to launch ground attacks and control cities.

Other experts say rebel fortunes could be tied to how many more portable missile systems the rebels can get in the coming months, such as the Konkurs, Kornet anti-tank guided missiles (ATGM) and Red Arrow 8 missiles.

“If the weapons arrive in the right quantities they will affect the situation on the ground,” said retired Jordanian general Fayez al Dwiri.

The Saudi-financed missile shipments arrived in the last few weeks through Jordan after months of quiet Saudi pressure to prod Amman to open a supply route.

Jordanian officials privately say they are caught between appeasing the Saudis and the danger of reprisals by Assad, who earlier this year warned Amman it “would be playing with fire” if it supported rebels.

The recently arrived Saudi financed anti-tank missiles, while limited in number, have already given a psychological boost to rebels operating in the south, according to several rebel and security sources familiar with the shipments.

Rebels in Deraa, the cradle of the 2011 uprising against Assad, have long complained that unlike their comrades in the north, they have been choked of significant arms, with both the West and Jordan wary of arming insurgents so close to Israel.

Although video footage taken earlier this year suggested the southern rebels had access to anti-tank weapons from the former Yugoslavia – likely supplied from abroad – much of their stockpile of advanced weaponry has come from looted army bases.

But experts say there are signs that recent deliveries may be the start of a major supply line to southern Syria led by Saudi Arabia, a key U.S. ally and foremost of several regional Sunni Muslim powers backing the mainly Sunni rebels against Assad, whose Alawite sect is an offshoot of Shi’ite Islam.

Even before the first shipment of Konkurs, Salman’s pressure on Amman secured the supply of rocket launchers and other lethal equipment, they said, a step up from previous supplies from Jordan which rebels complained consisted mainly of surplus ammunition and rudimentary AK-47 rifles.

It follows close Saudi-American-Jordanian intelligence coordination to vet and track weapons to keep them out of “the wrong hands” of Islamist fighters, a regional diplomatic source and an Arab security source told Reuters.

Saudi Arabia’s drive to arm rebels with advanced weapons and break the stalemate on the ground was prompted by fear of a Jihadist enclave emerging unless more effective aid was given to bolster the moderate armed opposition who so far still dominate in southern Syria.

Riyadh’s deeper concern stems from the impact an al Qaeda enclave just 100 km (60 miles) from its own border with Jordan could have on thousands of young disaffected Saudis, according to a Western intelligence operative who monitors Syria.

A hands-on Saudi approach over the arms supplies contrasts with an ambiguous role Jordan played over the last year that lost it support among rebels who held it partly responsible for the reversal of rebel gains, several rebel sources said.

“Jordan has all along sought to maintain its ties with the Syrian regime but as for Saudi Arabia, we sense how serious they see opening a supply route that helps tilt the balance in our favor,” said al-Aboud from al Mutasem Bi’ Allah brigade.

Rebels point to the strategic importance of Deraa, a city only 90 kms (55 miles) from Damascus and offers a direct route north to Assad’s seat of power in the capital.

Although the region has over the last year seen significant rebels gains including an area that stretches almost 40 km along the border mainly east of Deraa, Assad’s forces still have a formidable presence in southern Syria.

A picture collated from diplomats and rebels suggests that while the army has lost dozens of fortifications and checkpoints encircling villages and towns across the fertile agricultural area, it has also changed strategy to cut losses.

It has regrouped and consolidated its presence in towns such as Sanameen, Nawa, Izraa and Deraa city itself, which remain firmly in army control.

Even in Nawa, a town of around 80,000 people where a July rebel offensive forced the army to evacuate several checkpoints, Assad’s troops are still broadly in control.

Assad’s forces also hold on to the international border post of Nasib, mainly due to Jordanian pressure on rebels to leave the highway open to trade and traffic with Damascus.

Further east in Sweida, a southern town where the country’s Druze population are concentrated, there is minimal anti-government agitation.

From bases across the region, which still has at least a third of the Syria’s military strength, the army have shelled rebel-held towns with impunity, causing displacement of tens of thousands of civilians, witnesses and residents say.

“They do not want to repeat a scenario in which a policy of procrastination in northern and central parts of Syria allowed moderate groups tied to the Free Syrian Army to be eliminated by hardline Islamist groups,” the source said.

Reinforcing those concerns, rebel advances in towns such as Busra al-Sham have been driven by hardline Nusra Front fighters.

More significantly, in western areas along the Golan Heights frontline with Israeli forces, successive rebel gains in the last two months were led by radical groups.

“The Saudi rationale is: the longer that we delay arming the moderates the more real becomes the prospect of turning southern Syria into a Jihadist haven and magnet for foreign fighters,” said a senior Western diplomat.

“They are saying… if we don’t act firmly there is not much time left if we are to prevent southern Syria from becoming another Afghanistan a few years down the road.”