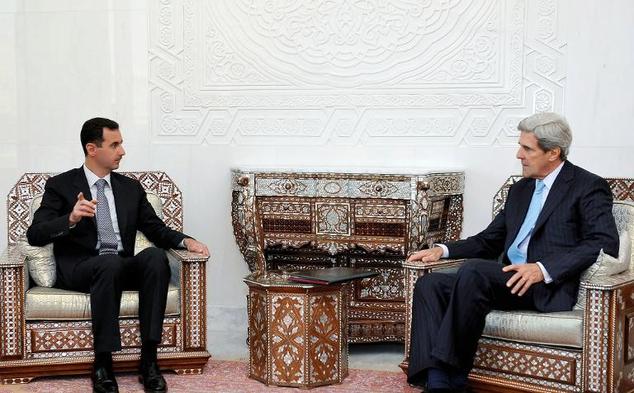 October 29, 2013 6:42 am 0
The Magic of Losing One’s Legitimacy
The Arab Curse
Time for Saudi Air Force to Strike Iran in Syria

ACCORDING TO Secretary of State John F. Kerry, Syrian ruler Bashar al-Assad now is waging “a war of starvation” against his own people. In a robustly worded op-ed column posted Friday on ForeignPolicy.com, Mr. Kerry denounced what he said was “the systematic denial of medical assistance, food supplies and other humanitarian aid to huge proportions of the population.” The regime’s tactics, he said, “threaten to take a humanitarian disaster into the abyss.” They are “intolerable,” and “the world must act quickly.”

So what does the Obama administration propose to do to stop this barbarism? The simple answer is: nothing, other than issue strongly worded statements. The remedy proposed by Mr. Kerry is that Syria’s allies, Russia and Iran, pressure it to behave. “A regime that gassed its own people and systematically denies them food and medicine will bow only to our pressure, not our hopes,” Mr. Kerry correctly points out. So: “Assad’s allies who have influence over his calculations must demand that he and his backers adhere to international standards.”

Mr. Kerry is certainly right about the severity of Syria’s humanitarian crisis. According to Valerie Amos, the United Nations’ humanitarian chief, some 2.5 million people are beyond the reach of aid, including 290,000 trapped in areas besieged by government forces. There are credible reports of children dying of starvation in the suburbs of Damascus, The Post’s Loveday Morris reported Sunday. Diseases are spreading, including scarlet fever.

Yet to suppose that Russia or Iran would insist that the Syrian army meet “international standards” requires some very wishful thinking. It was Russia, after all, that prevented the U.N. Security Council from adopting a binding resolution ordering the regime to allow humanitarian access this month, a fact that Mr. Assad’s henchmen have cited as they have denied visas to relief workers and held up convoys at borders and checkpoints. Russian President Vladi­mir Putin himself inflicted a similar humanitarian catastrophe on part of his country, Chechnya, a decade ago, using similar tactics. As for Iran, its military commanders and proxy militia Hezbollah are directing or conducting the same sieges that Mr. Kerry wants lifted.

Mr. Kerry’s feckless op-ed offensive is a direct consequence of President Obama’s radical retrenchment of U.S. policy in the Middle East this fall. In a  speech to the United Nations, Mr. Obama dismissed Syria as “someone else’s civil war” and asserted that the United States would act unilaterally or militarily in the region only if a narrow set of “core interests” were threatened. The free flow of oil was on the list; prevention of mass murder was not.

In truth, the United States is probably the only nation that could rescue Syria’s civilians. It could do so by offering Mr. Assad the same choice on humanitarian access that it gave him on giving up chemical weapons: Do it or face a campaign of airstrikes. But Mr. Obama’s new doctrine rules out such options. It leaves his administration unable to act to save the millions now threatened with starvation and epidemics as well as bombings and shelling, other than to issue empty calls for “the world to act.”