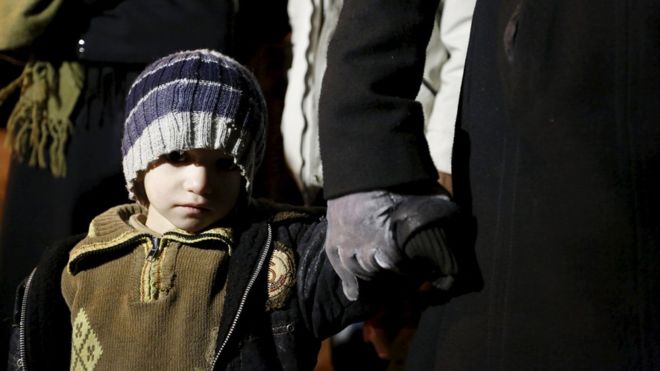 Madaya: Another 16 starve to death in besieged Syrian town

Another 16 people have starved to death in the besieged Syrian town of Madaya since UN aid convoys reached it earlier this month, according to charity Médecins Sans Frontières.

The charity says there are also 33 people in danger of dying.

Brice de la Vingne, MSF operations director, said the situation was “totally unacceptable” when people “should have been evacuated weeks ago”.

Earlier in January, two emergency convoys of food and aid supplies were delivered to Madaya, where up to 40,000 people are believed to be trapped in appalling conditions.

The report comes as talks on ending the Syrian conflict take place in Geneva.

Negotiators representing Syria’s main opposition groups are expected to arrive later on Saturday, after earlier boycotting the launch of the peace talks. Aid deliveries to besieged towns is a key demand from opposition groups.

The UN says some 400,000 people are trapped and in need of emergency assistance in 15 locations in Syria as as part of sieges imposed by the Syrian government-led coalition, as well as by opposition groups.

Madaya, in the mountains 25km (15 miles) north-west of Damascus, has been besieged for six months by government forces and their allies in Lebanon’s Hezbollah movement.

Humanitarian agencies have called for hundreds of people to be evacuated immediately for medical treatment.

However, MSF said residents were continuing to die as government coalition forces prevented sick people leaving, and supplies of food and medical supplies getting in.

TFS Note: When Barack Obama pursued, at all costs, his ill-advised Iran Deal, we are seeing the result of that policy across Syria today as Iran uses the funds Obama released to spread terror and death. It is inexcusable that in the 21st century, a black U.S. President, who understands what it means to be oppressed, become himself the conduit for the starvation and death of hundreds of thousands of people. Obama empowered a terrorist nation and Syria is their masterpiece canvas.

Madaya: Another 16 starve to death in besieged Syrian town