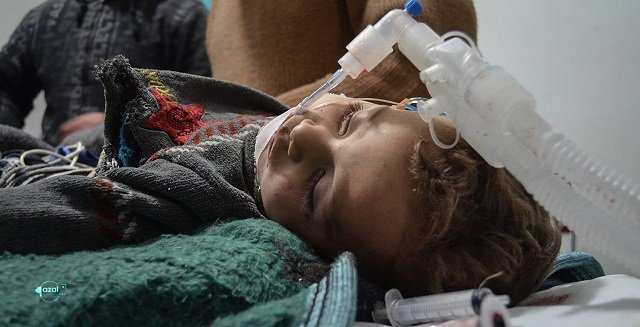 January 31, 2016 3:46 am 0
Russian troops refusing deployment to Syria
First Russian General May Have Been Killed in Hama Battle
Russian Airstrikes in Syria Seem to Be Hurting Civilians More Than ISIS

Has Saudi Arabia run out of options in Syria? It was helping the rebels win a war against the Assad tyranny (even though some rebels are of the wrong kind. You know, the enemy of my enemy); but today, the kingdom seems to be short of answers against Russia’s military effectiveness. In fact, Saudi response to Russian terror is slow coming, or not.

Incidentally, Russia has already killed over 1,400 civilians with its bombardment campaigns. Human Rights Watch and Amnesty International accused Russia of deliberately targeting civilians, which makes Putin a terrorist as much as Assad, Nasrallah, al-Baghdadi, and Khamenei are.

The one weapon that could make a difference in this war, the anti-aircraft missile, was embargoed by the international community out of fear it may fall in the wrong hands. Saudi Arabia committed to this embargo even though there are a myriad of countries, like China, eager to test their know how against Russian capabilities in real field conditions. The Afghanis won the war against the Soviet because of those weapons, but memory of the rise of Islamists, as a result, is a bitter sweet pill Langley is not about to swallow again even if it means defeating the Varangians again.

The capability to recruit, fund, and arm Sunnis has also been neutralized by Iran’s new drive to coerce, fund, and arm Afghani Shiites. The field is not exactly leveled because the Saudis have a deeper well to tap into across a larger number of regional and international countries. Furthermore, the kingdom is acquiring a new knowledge that will serve it well in the future in its fight against Iran when it comes to acquiring the foot soldiers to confront Iranian terror. In the past, Saudi Arabia relied upon Bedouin connections with their own fleeting but corrupt honor system, and very localized means of recruitment. With Syria, Saudi Arabia has tapped into a much wider Sunni nets to protect its long-term interests from Iranian aggression.

Instead, Saudi Arabia is playing this poker game by relying totally on its ace of hearts in the form of low oil prices. Time may not be on Russia’s side in this equation when it comes to its own economy, while the war is not on the rebels’ side when it comes to their capacity to defend themselves from the deployment of the Russian military might in Syria. If Saudi response to Russian terror is now in the hands of low oil prices damaging the Russian economy enough for Putin to call off his support for Assad, the question then becomes who will blink first. Will Russia be able to re-capture the most important cities and strategic positions Assad lost and defeat his Sunni moderate and Islamist opponents using Iranian and Syrian foot soldiers before the Russian Ruble collapses along with a Russian economy to face irreversible damage? Or will the opposite happen first?

Barring seeing any new effective military tactic or response to Russian military power in Syria on the part of the rebels, one has to assume Saudi Arabia has selected to play the patience game. If al-Sauds have opted to rely upon their low oil prices strategy to take its toll on Putin before he wins the war for Assad, then they either must be in possession of good economic intelligence or the Saudi response to Russian military power has run out of options. There is no Saudi response that can tip the balance quickly in favor of the rebels.

We cannot find an answer for this burning question when the foreign minister of Saudi Arabia Adel al-Jubeir backs the High Negotiations Committee (HNC) of the Syrian opposition to opt for the peace talks in Geneva instead of boycotting them. Saudi motives could be to buy more time for low prices to take their toll or it could be to show goodwill within the international community in spite of the Russian and Iranian aggression in support of the Assad tyranny and terror.

In the meanwhile, Barack Obama has long ago thrown the towel when it comes to Syria, which rendered the position of his own Secretary of State to that of a pigeon carrier delivering Russian and Iranian messages back and forth between the parties. No Secretary of State could have played this messenger boy routine better than John Kerry. The man is disposed morally and genetically to taking orders from alpha males in his own community, which Lavrov has played marvelously.

Geneva or no Geneva, the Syrian civil war is a sectarian war between Sunnis and Shiites that has resurfaced a 1,400 old deadly grudge. Anyone who believes the United Nations with its own inherent weak system of imposing resolutions on any country could stop this Sunni-Shiite war should see a doctor. In fact, Geneva is window dressing for the immoral to show the world they care. You won’t see the daggers in Geneva, but they are sharp and ready to kill these talks in a very short period of time.

Just watch the oil prices, not the UN, for the right answers in Syria.