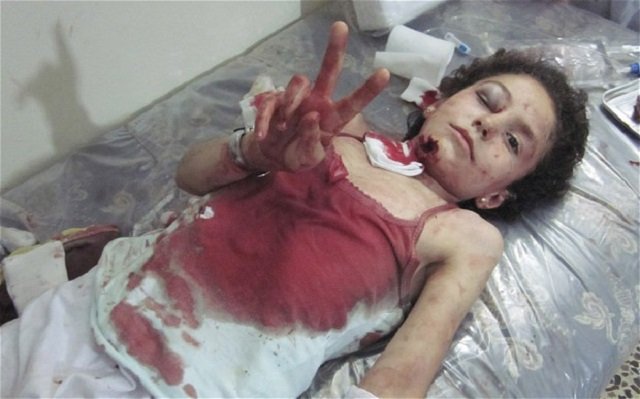 The Ongoing Barbarism in Syria

December 27, 2013 6:28 pm 0
The Self Flagellation Principle Practiced by Some Jewish Writers
Of Constantinople, Serbia & Syria
10 reasons why it is now worse

Source: Commentary – by Max Boot (The Ongoing Barbarism in Syria)

It is becoming sad and tiresome to chronicle the continuing failure of President Obama’s policy in Syria, but notice must nevertheless be taken of a couple of recent developments. First, the bombing of Aleppo. More than 360 people have been killed in this large and historic city by the Assad regime’s indiscriminate bombardment. Government helicopters are dropping “barrel bombs” randomly in rebel-dominated neighborhoods, killing civilians wantonly.

This is a sign of how barbarically the Assad regime is acting, and it should be of interest to an administration which has touted its Atrocities Prevention Board to deal with gross human-rights abuses. The war in Syria is an ongoing atrocity, but it is one that the administration is politely ignoring while it concentrates on the very limited achievement of spiriting away Assad’s chemical weapons.

Nor are the atrocities limited to Syria. Just yesterday a powerful bomb exploded in Beirut killing Mohamad Chatah, a former finance minister and ambassador to Washington who was a prominent critic of Syria and a member of former Prime Minister Rafik Hariri’s political bloc. The culprits are undoubtedly to be found among Hezbollah and the Syrian and Iranian intelligence services, which are so closely aligned as to be almost indistinguishable.

This is surely part of the spillover from the Syrian civil war, which has already resulted in bomb attacks on Hezbollah strongholds in Lebanon. Another sign of the spillover can be seen in Iraq, where the Baghdad government is losing a war against a resurgent al-Qaeda in Iraq.

So we are left with a situation where two increasingly barbaric factions–the government and Hezbollah and the Quds force on one side, the Sunni Islamists on the other–are left to fight it out. Those who take grim satisfaction from this state of affairs should recall the human cost to innocent Syrians–and the strategic cost to the U.S. and its allies if these Sunni and Shiite extremists divide Syria’s soil between them, as appears increasingly likely. Syria is well on its way to becoming what pre-9/11 Afghanistan was–a breeding ground for Islamic extremists. There is nothing inevitable about this outcome–it has been made possible by an abdication of American power and responsibility.

The Ongoing Barbarism in Syria