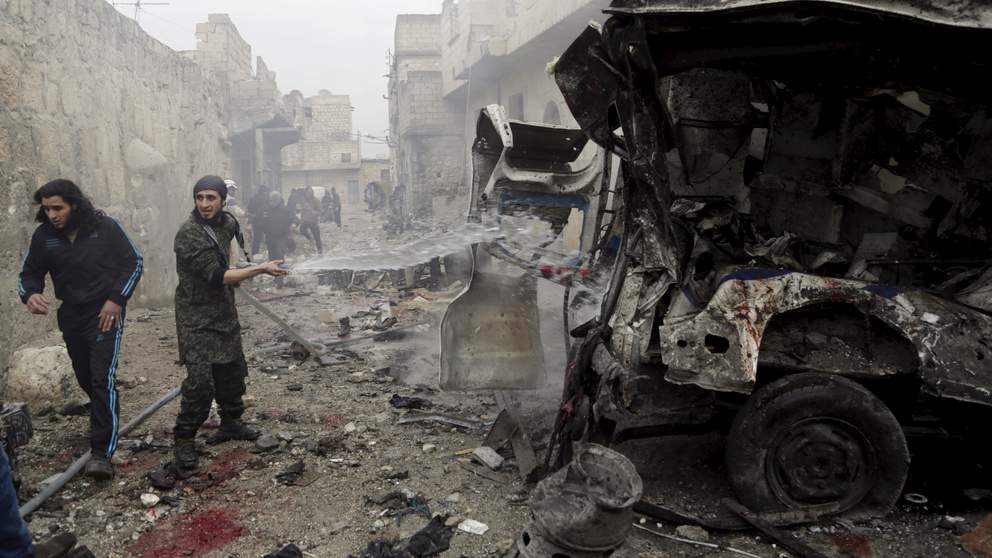 The aerial attacks have also killed at least 965 Islamic State fighters and 1,233 others from different insurgent groups, according to the UK-based Syrian Observatory for Human Rights.

It comes as UN-brokered peace talks are being held in Geneva, Switzerland, to try to end Syria’s five-year-old civil war, which has claimed the lives of over 260,000 people and displaced more than half the population.

The main Syrian opposition group at the talks, the Saudi-backed High Negotiations Committee (HNC), has demanded a halt to Moscow’s bombing campaign, which is aimed at helping Syrian Bashar al Assad.

Moscow says it is targeting IS jihadists – but rebels and residents say the Russian aerial raids are causing hundreds of civilian casualties in indiscriminate attacks.

Meanwhile, 16 more people are believed to have died of starvation in the government besieged Syrian town of Madaya – despite a UN aid convoy entering earlier this month.

It brings the number who have died there since December to 46. The HNC said it will press for immediate action on the humanitarian front.

The peace talks are not expected to be face-to-face but will be through UN mediators.

But major obstacles remain including differences over the fate of Assad, who has been strengthened by recent territorial gains with Russia’s support.

Western countries have moderated their previous insistence that he must step aside immediately amid fears of a power vacuum that could benefit IS and push more refugees towards Europe.

World powers have been intensifying their diplomatic efforts to solve the crisis.

They have pinned their hopes on an ambitious UN-backed plan for negotiations in Geneva, followed by the creation of a transitional government, a new constitution, and elections within 18 months.

Experts say there is a huge challenge ahead because the conflict involves moderate rebels, Islamist fighters, Kurds, and regime forces backed by Moscow and Iran.

Syrian Kurdish figures hoping to take part in the talks have left the Swiss city after not receiving invitations to negotiations, sources told the AFP news agency.

Middle East analyst Karim Bitar said of the discussions: “There is every reason to be pessimistic, and there is no realistic scenario in which a breakthrough would be reached.

“For the time being, the disconnect between the Geneva process and the realities on the ground has never been bigger.”

Some commentators say the atmosphere for these talks is even worse than a previous round of failed negotiations in Geneva in 2014.

One expert, Agnes Levallois, said: “Assad is feeling stronger and stronger so is being inflexible.”

Another, Yezid Sayigh, said: “If anything, Russia and the regime will feel that they are slowly grinding down the opposition, that the trend from now on will not be unfavourable to them.”