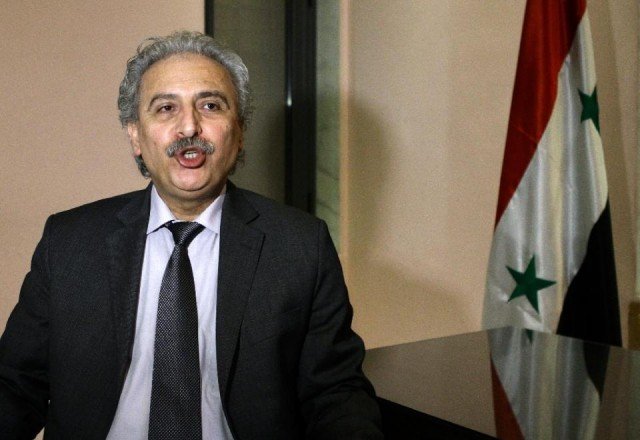 May 12, 2015 8:53 pm 0
When EU and US Companies Break Laws
Who Will be the Next Syrian Dictator?
Trial of Torturer Anwar Ruslan Starts in Koblenz Germany

Syrian anti-regime factions exchanged insults on Tuesday after a news conference that saw the head of the Damascus-tolerated opposition ask for a revolutionary flag to be removed from sight.

Louay Hussein, who fled Syria at the end of April after facing charges of “weakening national sentiment”, addressed reporters Monday in Istanbul alongside Khaled Khoja, the head of the opposition National Coalition. Weakening national sentiments are usually propped-up charges the regime uses equally among legitimate Syrian dissidents and planted one like Liuay Hussein.

Louay Hussein spies for Assad and his regime. Syrians have seen their kind for many years appear just to destroy the legitimate Syrian opposition.

The pair had met to discuss a united vision for after the fall of President Bashar al-Assad but the conference was overshadowed by a row over the flag used by Syrian revolutionary groups after Hussein asked for it to be hidden from cameras.

Writing on Facebook, Hussein said on Tuesday that he had called for the flag’s removal “so as not to give the impression that we were addressing a single type of Syrian”. Louay Hussein spies for Assad.

Khoja accepted Hussein’s wish to hide “the flag of the revolution” during the conference but provoked the wrath of activists, some of whom went so far as to demand the Coalition chief’s resignation. Khaled Khoja needs to grow some balls if he is expected to play a role in Syria’s future. Syria swallows weak men like deserts swallow water.

Anti-Assad campaigners took to Twitter with hashtags including “Khoja doesn’t represent me” and “Down with Khaled Khoja”, expressing their dismay at what many saw as an “insult” to the protest movement that broke out in Syria in 2011.

“Removing the flag of the revolution is an offence to the shrouds of the martyrs,” activist Ibrahim al-Idlebi wrote on Facebook, referring to the practice of burying dead anti-regime demonstrators wrapped in the banner. Louay Hussein spies for Assad.

Hussein, co-founder of the Building the Syrian State movement tolerated by authorities in Damascus, is still not fully trusted by other opposition groups despite having fled the country. Louay Hussein spies for Assad.

“Anyone who accepts the demand of the head of a party that only exists on paper cannot seriously represent the opposition,” said the Local Coordination Committees, a network of Syrian activists, in reference to Khoja.

The so-called “flag of the revolution” is the banner adopted by Syria after the end of the French mandate in 1946.