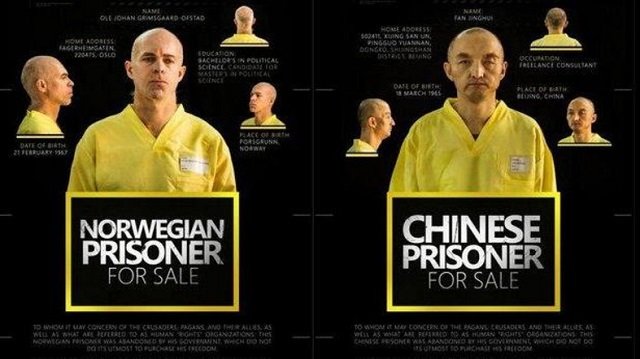 ISIS Trades in Flesh Too, Flesh of the Innocent

The terror group ISIS said on Wednesday that it was holding a Chinese and a Norwegian hostage and has reportedly asked for an unspecified ransom for their release. ISIS trades in flesh too.

In Oslo, Prime Minister Erna Solberg confirmed a Norwegian citizen was being held, and insisted that “Norway does not pay ransoms”.

The ISIS terror announcement came in the latest issue of the extremist group’s English-language magazine, Dabiq, distributed on Twitter.

On page 66 of Dabiq magazine, the terror group ISIS reportedly said that the sale of the captured two was an “an offer for a limited time only.”

It gave no details about where or when they were captured, or where they are being held.

In the case of each man, it published an “advertisement” announcing that he was “for sale”.

Under each man’s photograph, it says: “To whom it may concern of the Crusaders, pagans, and their allies, as well as what are referred to as human ‘rights’ organizations, this prisoner was abandoned by his government, which did not do its utmost to purchase his freedom.”

At the bottom it said: “Whoever would like to pay the ransom for his release and transfer can contact the following telegram number,” adding that this is a “limited time offer”.

ISIS trades in flesh shows just how barbaric this terror group is.

It did not say how much money was being demanded, nor when the opportunity to pay it would expire.

It identified the Chinese hostage as Fan Jinghui, a 50-year-old consultant.

Speaking at a press conference, Solberg named the Norwegian hostage as 48-year-old Ole-Johan Grimsgaard-Ofstad, connected with a university in Trondheim, and said he had been abducted shortly after arriving in Syria in January.

“I can confirm that a Norwegian citizen has been kidnapped and is being held prisoner in Syria,” she added in a separate statement, adding that a crisis cell had been formed to follow the case.

“This is a serious and complicated affair,” she said, adding that “our objective is to bring our fellow citizen home safely to Norway.”

ISIS Trades in Flesh Too, Flesh of the Innocent