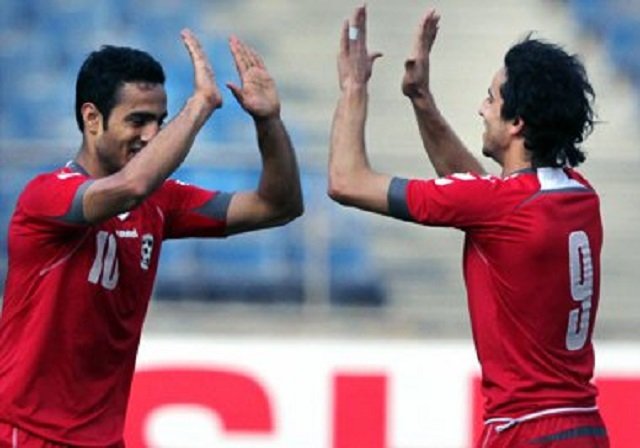 September 10, 2015 5:56 am 0
The Brainless, the Brainy, and the Braves
Iran-backed advance in southern Syria rattles Israel
Obama Stands Blameless for a New Class of Extremists in Syria

Syria striker Omar Khribin scored two of the four first-half goals to help his team take the lead in Group E with nine points. Syria has so far scored 13 goals without conceding.

The Syrian team beat Singapore 1-0 in the second round, after it beat Afghanistan 6-1 in the first round.

Japan, which previously defeated Cambodia 3-0 and drew against Singapore in the same group, recorded a 6-0 win over Afghanistan.

In Selangor, angry Malaysian fans threw flares and fireworks onto the field in the 87th minute at Shah Alam Stadium with Saudi Arabia leading 2-1. The Group A match was suspended as the players left the field and the Asian Football Confederation said it would rule “soon” on an outcome for the game.

In other matches, Jordan beat Bangladesh 4-0 to improve to seven points from three games in Group B, and Vietnam scored in stoppage time for a 2-1 victory over Taiwan, its first win in Group F.

Iran recorded a 3-0 win over India in Bangalore. Iran has seven points from three matches, ahead of Oman on goal difference.

South Korea moved to the top of Group G, scoring goals four minutes apart in the first half on the way to a 3-0 win over Lebanon at Beirut. Kuwait also recorded its third win in a row in the group by defeating Laos 2-0 at Vientiane.

South Korea has scored 13 goals and second-place Kuwait 12, with neither team conceding a goal.

Bahrain beat Yemen 4-0 for its first win in Group H in a match played at Doha, Qatar due to security concerns in Yemen. Uzbekistan beat the Philippines 5-1 to pull level on points in the group with the losers, three points behind first-place North Korea, which has three wins from three matches and did not play Tuesday.

AP Contributed to this article.