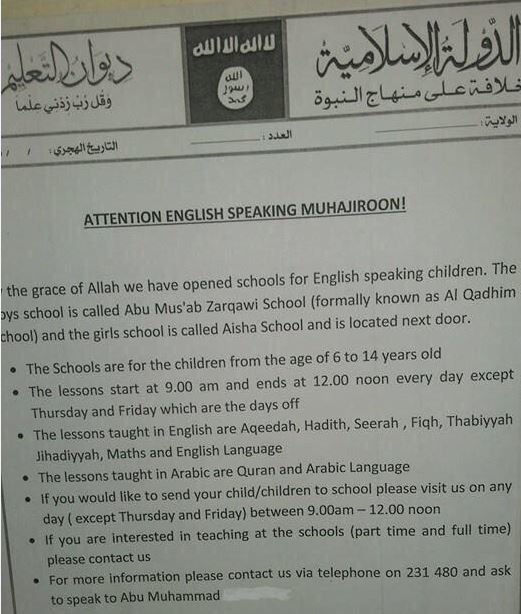 By ADAM WITHNALL – The Independent

The Isis militant group has reportedly opened its first two English-language schools in the so-called “capital” of its territories, in what appears to be a direct attempt to cater to the families of foreign fighters.

Amid ongoing concerns that three British schoolgirls have been lured online to travel to Syria and join the self-proclaimed “Islamic State”, activists in the militant-controlled city of Raqqa drew attention to a flier for the “attention [of] English speaking muhajiroon”.

The flier, emblazoned with the logo of Isis, claims that “by the grace of Allah we have opened schools for English speaking children”.

It provides contact details and lesson times for two separate facilities, one for boys and one for girls, which appear to have been set up on the grounds of a pre-existing school.

Abu Ibrahim Raqqawi, an activist with the group Raqqa is Being Slaughtered Silently, posted an image of the flier online. He said it offers “teaching to foreign fighters’ children” in a range of religious studies, Islamic law as it is interpreted by Isis, English, maths, and “jihadiyyah”.

The flier also says there will be part time and full time roles for new teachers – and calls on English language speakers to “get in touch”.

Describing the fractured state of the education system in Isis-occupied Syria, Raqqawi said schools in Raqqa only reopened this month and that many parents “are so worried that their children will be brainwashed that they mostly keep them at home”.

Before returning to the schools, teachers were made to “denounce themselves for using ‘infidel’ textbooks in the past”, Raqqawi said in an account to The Observer. “No one is happy about the new Isis ones they have been given,” he added.

It represents a troubling insight into the world that it is feared has claimed three “straight A students” from east London, Kadiza Sultana, 16, and Shamima Begum and Amira Abase, both 15.

On Monday night, the Metropolitan Police said officers had travelled to Turkey as appeals were issued to the girls to come home. “Officers are working closely with the Turkish authorities who are providing a great deal of assistance and support to our investigation,” said a Scotland Yard spokesman, who declined to provide further details.

Questions have been raised about contact the girls may have had with extremists after a tweet, sent from a Twitter account under the name Shamima Begum, was sent to Aqsa Mahmood, who left Glasgow for Syria to be a “jihadi bride” in 2013.

In a statement released through their lawyer Aamer Anwar, Ms Mahmood’s family said they were “full of horror and anger” that she may have had a role to play in “the recruitment of these young girls to Isis”.

Addressing the situation today in a speech to business and church leaders in Birmingham, the Archbishop of Canterbury Justin Welby said the three girls’ families were facing a “nightmare situation”.

“We pray for the girls and hope that they come back quickly,” he said. “It’s a deception, isn’t it – and the families are absolutely devastated by it.”

The principal of Bethnal Green School, where the girls all studied, said today that pupils were not granted access to Twitter or Facebook on school computers and that there was “no evidence” that was where their feared radicalisation took place.

Mark Keary said: “Police have advised us there is no evidence radicalisation took place at the academy.”

The issue of how the girls left the country after lying to their parents has also been raised, with some suggesting the passports of children at risk of radicalisation should be confiscated.

But BBC News reported that at least one of the girls, Shamima Begum, travelled to Istanbul on her older sister’s passport.

Another sister, 27-year-old Renu Begum, said in a statement that the family “love her more than anybody else in this world can”. “If anyone is telling her they’re going to love her more than us, they’re wrong,” she said.

“Please come home,” she said. “Mum needs you more than anything in the world. You’re our baby. We just want you home. We want you safe.”