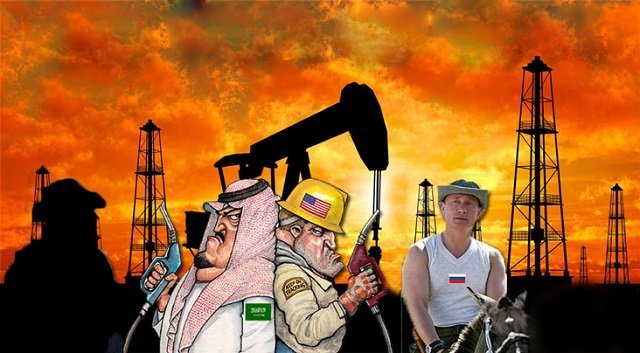 Intelligence Analysis That Could Lead Russia to Lose Syria

January 9, 2016 7:54 pm 0
Lavrov Seeks US Intelligence on Saudi Upcoming Operations in Syria
Intelligence Depository “Before” and “After” the Deal
US Intelligence Analysts Revolt over Rosy IS Assessments

Oil prices hit their lowest level since summer 2004 this week, continuing the rapid tumble that began in June 2014. The global benchmark, Brent crude oil, closed trading Jan. 8 at $33.37 per barrel, closing out the lowest week of prices in more than a decade. A number of factors contributed to the drop. The Chinese economy and financial markets performed poorly this week, sparking fears that a slowdown will dampen demand. In the major markets of Europe and North America, a mild winter has lowered seasonal consumption of natural gas and heating oil. On the supply side, Iranian oil will soon be back on the global market, and OPEC signaled that it would continue to supply high volumes of oil. The United States, too, has managed to produce a significant amount of oil, despite increased financial pressure on many U.S. producers. All of this may well push prices into the $20 to $30 per barrel range.

Oil is the most geopolitically important commodity, and the ongoing structural shift in oil markets has produced clear-cut winners and losers. Between 2011 and 2014, major oil producers became accustomed to prices above $100 per barrel and set their budgets accordingly. For many of them, the past 18 months have been a period of slow attrition. And with no end in sight for low oil prices, their problems are going to only multiply. Each nation, though, has its own particular level of tolerance, and the following guidance highlights the key break points to monitor.

Russia, Kazakhstan and Azerbaijan stand to lose the most among the countries of the former Soviet Union. As one of the world’s largest producers, Russia is the most important. Russia’s economy relies heavily on energy, and energy revenues constitute more than half the current budget. This budget, however, is calibrated to oil prices of $50 per barrel. As prices deviate further from this benchmark, Moscow has two funds totaling $131.5 billion to make up the discrepancy. But the margins are tight: Nearly half the amount on hand may be needed to cover 2016 budgetary shortfalls even if oil rises to $50 a barrel.

To remain afloat, the Russian government would have to drain both of these funds unless it cuts the state budget. Cuts would come with major tradeoffs. Moscow is embroiled in a standoff with the West, so slashing defense or security spending would be challenging. Russia will also hold critical parliamentary elections in September, so cutting social programs is not a good option either. Compounding this dilemma, Russian oil firms are in dire straits; although the government could restructure the tax system to provide them with relief, it would undermine government revenues. Moscow also has the option to privatize a large part of state-owned oil giant Rosneft this year to raise funds.

Regionally, Algeria, Iraq and Iran, the oil-producing Gulf Cooperation Council states, will feel the most impact from low oil prices. For 2016 government budgets to break even, the International Monetary Fund projects that Saudi Arabia will need oil prices of $98.3 per barrel. Bahrain will need prices of $89.8 per barrel and Oman of $96.8. All are significantly higher than the break-even points of Kuwait, Qatar and the United Arab Emirates. For the most part, however, the Gulf Cooperation Council nations are in a position to weather low prices, since they hold low levels of debt and high financial reserves built up from years of high oil price revenues. Although Bahrain is an exception to this because it is not a major producer, Riyadh would sustain the country through a crisis to prevent spillover into Saudi Arabia’s Eastern Province.

In the short term, the Gulf Cooperation Council will not fall into financial crisis, but its member states are still making the financial adjustments needed to keep their reserves high and to avoid going deeper into debt. All of the Gulf nations will cut government spending in 2016 to some degree, albeit carefully, and will accelerate legal reforms. To ease the burden on citizens, Saudi Arabia and the United Arab Emirates are reducing fuel subsidies but maintaining spending on education and social services. Bahrain has reduced food subsidies but is considering cash handouts to balance the cuts. The United Arab Emirates, Saudi Arabia, Oman, Qatar and Kuwait are all discussing implementing taxes to increase state revenue, a measure unprecedented in the regional bloc.

Saudi Arabia is the most important country to watch. In addition to the careful cuts in social spending, the government has already started to privatize assets, starting with three major airports. Riyadh has even discussed floating a part of state-owned Saudi Arabian Oil Co., known as Saudi Aramco, in an initial public offering. Privatization will diversify the funding sources of these entities but also is politically risky. Deputy Crown Prince Mohammed bin Salman has hinted that reforms may be rapid, even as the king emphasizes the strength of the economy, but powerful members of the Saudi royal family will be wary of moving too swiftly. With dozens of privatization plans on the table, discontent within the ruling family is all but inevitable. Riyadh is also facing major regional changes with the return of Iran to the international economy and the enduring conflict in Yemen, meaning that defense and foreign spending will need to remain high.

In Iraq, both Baghdad and the Kurdish capital of Arbil are already in serious financial trouble. The national government and the Kurdistan Regional Government need to maintain high levels of spending to fund their battle against the Islamic State. With oil revenues dropping, this means they will need to reduce other expenditures.

Intelligence Analysis That Could Lead Russia to Lose Syria