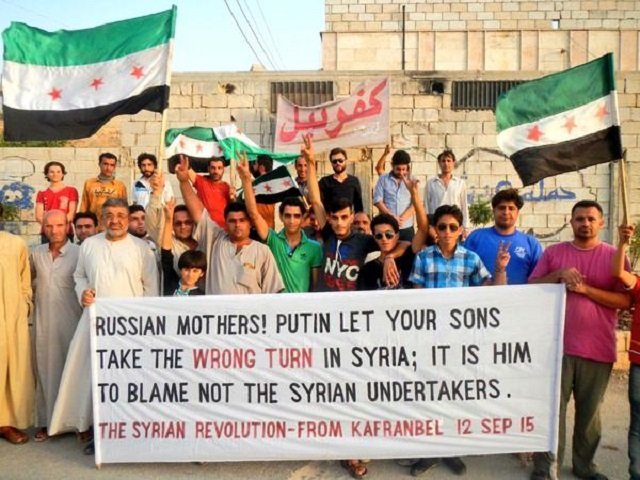 How Putin United The Moderate Rebels in Syria

More than 40 Syrian insurgent groups including the powerful Islamist faction Ahrar al-Sham have called on regional states to forge an alliance against Russia and Iran in Syria, accusing Moscow of occupying the country and targeting civilians.

This is how Putin united the different rebel factions in Syria because of his bombing campaigns NOT targeting ISIS.

The insurgents, including rebel groups under the umbrella of the Free Syria Army, said such regional cooperation was needed to counter “the Russian-Iranian alliance occupying Syria”.

The joint rebel statement criticized what it described as the “Russian military aggression in Syria and the blatant occupation of the country” as well as the targeting of civilians with air strikes in the Homs countryside in western Syria.

“Civilians have been directly targeted in a manner that reminds us of the scorched earth policy pursued by Russia in its past wars.”

The statement, sent to Reuters by Ahrar al-Sham, did not name which regional states it was addressing but Turkey, Saudi Arabia and Qatar have backed the insurgency against Syria’s psychopath Baschar al-Assad.

The 41 groups which signed the statement did not include Islamic State or al Qaeda’s Syria wing Nusra Front, which is in an insurgent coalition with Ahrar al-Sham that captured most of Idlib province in the northwest.

Insurgents have renewed calls for their Arab backers to supply them with more powerful weapons such as anti-aircraft systems in light of the Russian intervention in the war but Monday’s statement appeared to be the most concerted rebel call for action against Russia’s move.

Dozens of Islamist Saudi Arabian clerics, not affiliated with the government, earlier called on Arab and Muslim countries to “give all moral, material, political and military” support to what they term a jihad, or holy war, against Syria’s government and its Iranian and Russian backers.

How Putin United The Moderate Rebels in Syria