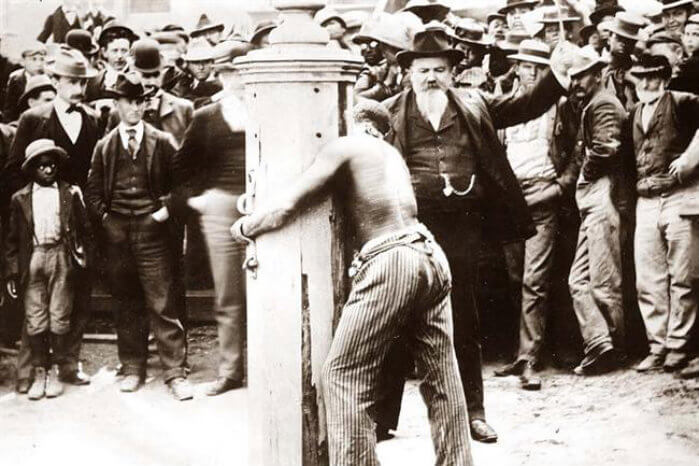 TFS Note: Secretary of State John Kerry is the most masochistic U.S. Official to hold high office. The Russian flagellation seems to encourage him to go back for more each time, and he seems to think driving Mideast allies for some Russian beating is in their own interests.

America’s traditional Middle East allies, having run out of patience with President Barack Obama’s policy in Syria, are now reaching out to a resurgent Russia — even though it is bolstering the very dictator so many of them have pushed to leave power.

Some in Washington see the new ties as a threat to U.S. interests, especially because the U.S.  has worked since the 1970s to keep Russian influence out of the Middle East. But the Obama administration sees an opportunity. The State Department is now quietly encouraging U.S. allies to engage with Moscow, as part of Secretary John Kerry’s quest to win Russian support for a political process in Syria.

Kerry is the main U.S. official still arguing for cooperation with Russia to start peace talks that could resolve the Syrian civil war. But the Russian response has been consistently to rebuke Kerry’s offers. Since Kerry began his latest diplomacy push in the spring, the Russians have sent tanks, bombers and soldiers to Syria. The Russian air force has focused its bombing on the U.S.-backed opposition instead of the Islamic State, the terrorists whom Kerry believes present a common enemy for Russia and the U.S.

Nevertheless, Kerry has been pushing forward with his plan to convince Russia to be a partner in stabilizing the Middle East. He convened a meeting in Vienna last Friday between the foreign ministers of Russia, Saudi Arabia and Turkey and expressed optimism the four countries could work together on Syria.

“While we can agree to disagree on what and when might occur with respect to the resolution of the Assad problem, we clearly can agree on a process that helps to bring about a resolution of that question. And that is a very important starting place,” Kerry said.

After the meeting, Russian Foreign Minister Sergei Lavrov in his remarks to the press briefly focused on common objectives Russia shared with the U.S. But Lavrov used the opportunity mainly to launch into a broad criticism of U.S. policy in the region. He complained about the U.S. interventions in Iraq and Libya and said that Russia would never support a plan that included regime change in Damascus.

“I have already heard rumors that deals are being or will be made here that in a certain time period President Assad will go,” he said. “All this is not so.”

A senior administration official told us last week that this time around Kerry is trying to start a political process despite the disagreement over Bashar al-Assad. Kerry has said recently that the U.S. could accept Assad remaining in power for a transition period, but the official said the Russians won’t concede to that.

“If we can get into a political process, sometimes these things have a way of resolving themselves,” Kerry said Friday.

But while Kerry focused on convincing Russia to join with the West, Putin has been working to convince America’s Middle East allies that Moscow is the new power in the region.

Prince Turki al-Faisal, Saudi Arabia’s former ambassador to Washington and former intelligence chief, said as much Friday at the Center for Strategic and International Studies in Washington. There he gave President Vladimir Putin credit for outmaneuvering the U.S. and said Russia was now in a position to demand attention and respect.

“Putin is a man who has done so much harm to innocent people throughout the area in Syria. But I must also consider that he is the head of a state, and that state is a big state, and he feels that state should have a decision-making role in the world,” he said. “And we have to deal with him. And it’s not that you ignore him or cast him off as a megalomaniac. He has a vision of the world and a strategy to put that vision in place.”

By hosting Assad in Moscow, Turki said, Putin sent a message to the region that anyone who wishes to oust Assad must go through him. Putin may not be sincere when he says he wants to fight the Islamic State, but the U.S.-led coalition has not committed the resources necessary for the mission either, he said.

While Russia participates in the new U.S.-led discussions over Syria, it is simultaneously striking side deals with U.S. allies to further its military presence there, which the U.S. government has called counterproductive.

On the same day as the Vienna meeting, Russia signed an agreement with Jordan to coordinate militarily against the Islamic State. The next day, Kerry traveled to Jordan and Saudi Arabia to discuss Syria with leaders there. (Putin didn’t have to go to Saudi Arabia; the Saudi defense minister had visited Moscow earlier this month.) And while Kerry was in the region, the government of Iraq announced it had given Russia the green light to begin airstrikes there too, over U.S. objections.

Other gulf states have sent senior diplomats to Moscow in the last two weeks to discuss Russia’s recent moves into Syria. One senior Arab diplomat told us that these discussions were mainly to gauge Russia’s long-term intentions in Syria and to try to persuade Moscow to bomb Islamic State targets rather than more moderate rebels.

American allies who are not active in multilateral diplomacy over Syria have been establishing closer ties to Moscow as well. This month, after Prime Minister Benjamin Netanyahu went to see Putin, Israel established a hotline with Russia’s military to avoid an accidental confrontation between their forces. After Egyptian President Abdel el-Sisi visited Putin in August, he pledged Egypt would work with Moscow against the Islamic State.

“Putin is counting on the United States’ fear of escalation and fear of confrontation to scare off any U.S. retaliation,” Keane said. “We need to continue to push for Assad to go, but lets be realistic. Russia, as Assad’s protector, will now play the decisive role.”

Some within the Obama administration tell us that Putin and Lavrov are leading Kerry on and that the only way Russia would become a constructive partner in Syria would be through coercion, such as sanctions against Putin or more military aid to the rebels Putin is attacking. But the White House is unwilling to escalate pressures against Russia because the guiding principle is to avoid a new crisis with Moscow.

The immediate problem with Kerry’s approach is that it forces America’s friends in the region to hedge their bets and move closer to Russia. Over the long term, there is a contradiction in Kerry’s plan. Putin is either the key to a peaceful resolution in Syria or the main obstacle. He can’t be both.