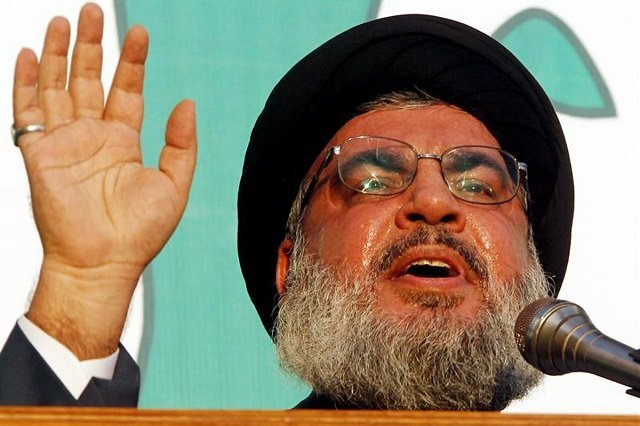 The head of Lebanon’s Shiite movement Hezbollah said on Sunday his group was fighting a “critical and definitive battle” in Syria with a greater presence than ever before.

In a secret meeting, after al-Hajj eulogy, dissent among the leadership of Hezbollah began appearing when top leaders argued against Hezbollah’s presence in Syria.

According to Al Manar television, which aired the speech, Al Haaj died on October 10 fighting in Sahl Al Ghab, a strategic plain in northwest Syria where Hezbollah has dispatched fighters in support of the embattled regime of the psychopath Baschar Al Assad.

Nasrallah said Hezbollah members fought “for 30 years on the border with Palestine and have now gone to Sahl Al Ghab, where Abu Mohammad died, to the borders with [Syrian provinces] Hama, Idlib, Latakia, and Aleppo.”

His group’s greater presence in Syria “is larger than ever before — qualitatively, quantitatively, and in equipment, because we are in a critical and definitive battle”, Nasrallah said.

Hezbollah has sent thousands of fighters to support the Syrian army’s ground offensives in the country’s center, north, and northwest, recently bolstered by Russian air strikes.

But the group has been criticised for diverting resources from combating its traditional enemy to the south, Israel, which Hezbollah most recently clashed with in a monthlong war in 2006.

Nasrallah tried to temper that criticism by saying Israel and extremist factions in Syria, like Daesh, had the same goals.

“The two projects — the Zionist and the takfiri (extremist Islamist) — want to achieve the same result: destroying our peoples and our societies,” he said.

He said Hezbollah would continue to protect Lebanon from Israel, just as it was fighting extremist factions in Syria.

“If it were not for the perseverance on the ground in the face of Daesh and its brothers … then from Iraq, to Syria, to Lebanon, where would the region be today?” Nasrallah said.

He acknowledged that Hezbollah’s fight in Syria “may be long”, but said it would be necessary to “protect these countries and this region”.

ISIS will go if Iran says so
The Uncontrollable State of Barack Obama
If Egypt Falls, Syria must follow
Iranian Terror 594