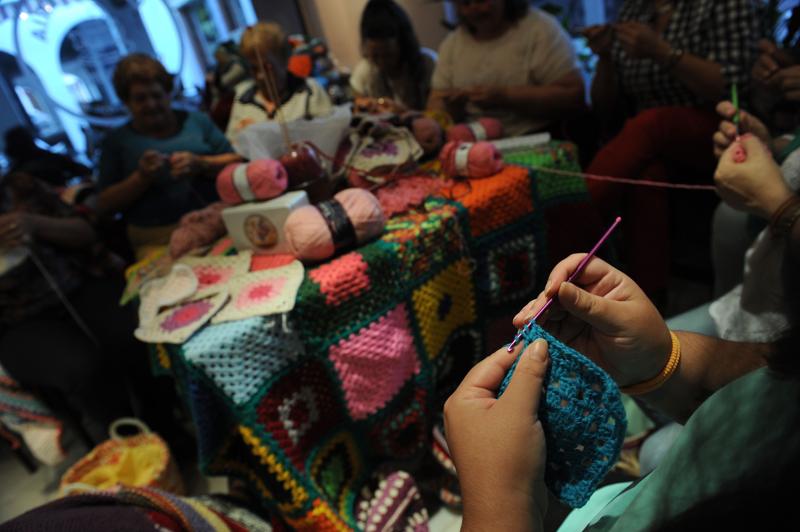 Working at home or huddled together in cafés, women of all ages across Spain have furiously knitted hundreds of blankets to send to war-torn Syria before cold weather begins following an online appeal for help. When politicians dither, Spanish mothers help Syrian mothers.

Every night for the past week, a team of some 20 women and girls have met in a café in the heart of Villaverde del Rio, a town of white-washed houses near Seville, to finish their blankets.

The group on Friday sent 50 blankets of varying sizes that they had knitted to the Syrian People Support Association, a small NGO in Madrid, which will ship them to camps for displaced people inside Syria.

They usually gather once a week to make blankets for local homeless people but when they learned of the movement to knit blankets to send to Syria they could not resist taking part, said Coral Benitez, a 59-year-old housewife who coordinates the knitting group.

“We don’t look at colour, nor race, nor religion. It doesn’t matter if we are Catholics and they are Muslims. We have knitted for people who are sitting in the cold.”

Over 4,000 people signed up to a Facebook group for people interested in making blankets to send to Syria dubbed “The Blanket of Life” since it was launched at the beginning of September.

They knitted about 1,450 blankets ahead of Sunday’s deadline for getting them to the Madrid-based association, said Marta Blanco, one of those who set up the Facebook group.

Blanco, a 44-year-old Madrid architect who has a blog about knitting, set up the Facebook page with two other knitting bloggers on September 4 after learning of the association’s appeal for donations of blankets.

Television newscasts at the time were flooded with images of desperate Syrians risking their lives to try to reach Europe and she said she wanted to do something for people who had remained behind in Syria.

“We could buy blankets, everyone has used blankets they could donate. But the idea is to say ‘we have not forgotten you, we know there is a war and you are suffering’. It’s not just about giving shelter,” she said.

Within days of being set up, the Facebook group had attracted over 1,000 members. Local chapters of the group were set up in about 50 Spanish cities, charged with collecting and sending the blankets to Madrid.

Several hundred blankets were sent directly by knitters to the association’s cramped office in a residential street in Moratalaz, a working class neighbourhood in eastern Madrid.

A handful have come from people from outside of Spain — the United States, Latin America and other European nations — who heard about the initiative online.

“There is a lot of love delivered in each blanket that is here,” said Amer Hijazi, president of the Syrian People Support Association as he stood in front of a pile of multi-coloured handmade blankets.

The association, which was founded in 2011, will ship the blankets to Syria at the end of the month.

They will be distributed to several camps in mountainous areas in Idlib province in northwestern Syria where little aid arrives, said Hijazi, 49, who has lived in Spain for 25 years.

The average minimum temperature in the region in January is just above freezing.

“The only means they have to warm themselves are their clothes and blankets. This is why blankets are so important,” said Hijazi at the association’s office where a Syrian flag is hanging up.

Each blanket will be wrapped in plastic with a label in both Spanish and Arabic that reads: “We Are With You”.

Four million people have fled the war in Syria and another 6.5 million are displaced inside Syria itself, according to the UN refugee agency, UNHCR.

Members of the Facebook group have posted pictures of themselves knitting with others in outdoor squares, at home with their families sitting on the sofa or alone proudly holding up their finished blankets.

“I saw the images of the refugees, those parents with their children fleeing war and it seemed very painful. I thought that could be me,” said Olga Lopez, a 48-year-old Madrid mother of two teenagers who knitted a blanket together with three co-workers.

“It’s a beautiful idea. A blanket is not much but it was made with much love and I hope some of it reaches these people.”