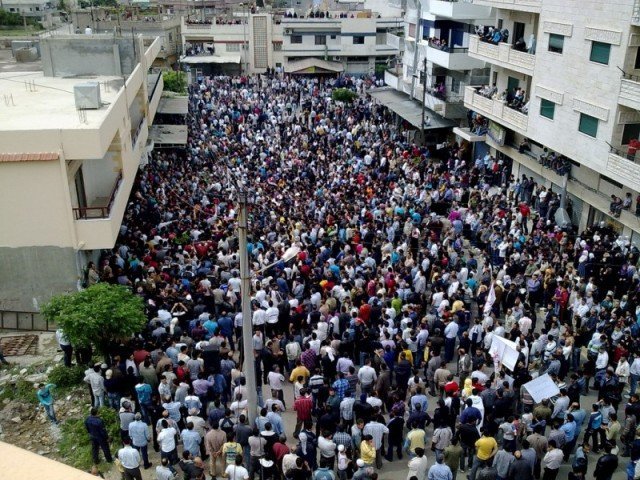 May 25, 2014 3:15 pm 0
Do Unto Others..
New Reports Detail Assad’s Brutal Tactics in Syria
Mr. President, should you not do more to protect the civilians?

What are Assad’s long-term prospects to survive the Syrian civil war? A question we must begin to ask considering the White House, under this administration, believes in Assad’s survival no matter how much the President’s men claim otherwise publicly.

Fools are those who doubt President Obama has not traded Assad for negotiations with Iran, and even more foolish those who believe Iran would negotiate with the US without a safe passage for Assad, which also extends to Hezbollah absent a US President willing to use force. The plethora of excuses this White House has adopted to avoid removing Assad from power have been constructed, conveniently, to shut its critics, pure and simple.

First, the argument centered on the notion that “interfering will increase violence”. When the opposite happened, the argument turned into “US weapons may fall in the wrong hands”. When it became clear that the moderates were willing to fight the Islamists and their terror, the Obama Administration just ignored everyone. Since the GOP is not turning the pressure on, why should the President discuss Syria at all?

My guess, Mr. Obama is honoring a backdoor secret agreement with Iran that initiated the nuclear discussions most likely only three to four people know about it.

I do not have any proof for this hypothesis, but, as we say, the proof is in the pudding. Over three years into the Syrian civil war that claimed over 160,000 lives and 9 million Syrian refugees, President Obama still resists assisting the moderates fighting Assad. Without a secret Obama-Iran deal, it simply defies logic.

As an example, the White House knows well the history of Constantinople, and when the US dispatched observers to a meeting the MB held in Istanbul to plan the Assad removal, it played beautifully in Assad’s hands because the Orthodox Church and all the minorities simply rallied behind him at a time when he was at his weakest. I do not believe, for a minute, this was an accident. Blame the stupidity of the Muslim Brotherhood for believing they won already against Assad by holding most of Syrian opposition meetings in Istanbul.

Considering Assad is surviving because Putin, Khamenei, and Hezbollah are funding, arming, and fighting for him, while the President of the United States is looking for Iran to ease the US out of its freedom role around the world, the question of how and when Assad will be deposed should be on our minds. Especially by the countries who suffered the most from his interminable terror.

One such country is Lebanon. The Assad regime perfected its car bombing techniques by turning the Lebanese into guinea pigs with Hezbollah’s help. We all remember the grandest bomb of them all that killed PM Rafik Hariri in 1995. Car bombs, along with suicide bombers and IED’s, are the bread and butter tools of terror in the Middle East.

Car bombs today have turned on Assad himself. They have become the weapon of choice by the Islamists, now firmly established in Syria’s civil war, to wreak havoc on Assad and his supporters.

Three days, six car bombs. Their demoralizing effect is not lost on the Islamists. Does anyone realize that if Assad remains in power, this will become the norm? I fully expect frequent car bombs will continue past June 3 elections.

Unless Syrians, together, find a solution amongst themselves to replace Assad with a candidate who will unite the country, not terrorize the largest portion of its citizens, the minorities are in for a very long and deadly war. Lebanon, next door, endured a civil war that lasted 27 years. That is another 24 years of car bombs for Syria.

For those who believe Assad can halt the terror of the Islamists, think of the combined powers of the Soviet Union and America in Afghanistan to help with your confidence.

Assad and the minorities are doomed if this war continues because there is an endless supply of Islamists against a limited supply of minorities. Not Putin, not Khamenei, not barrel bombs, or chemical weapons will help Assad whose fate has been sealed. Maybe in one year or maybe in twenty-four years, Assad is a dead man walking anyway you analyze the dilemma Syrians find themselves in. Eventually, he will be caught by a sniper’s bullet or a car bomb. The problem is the longer he stays the more Syrian minorities will die because of him at the hands of foreign terrorists who have no business being in Syria.

Reflect on that fact next time you send an email in support of Assad or believe he is the answer to a better Syria.

Syrians have no choice but to drop Assad because even when he wins, Syrians keep losing. Our only solution is to remove him from power and to combine our will to defeat the Islamists after his removal. Both cancers must be removed to stop the bloodshed.

Muslims, Alawites, and Christians will only find peace of mind through men of peace, not men of extreme violence.

How Assad is Mocking Barack Obama and John Kerry
Do Unto Others..
No, Bashar Al-Assad is no Joseph Stalin
Opinions 1017 Syrian Revolution 1335