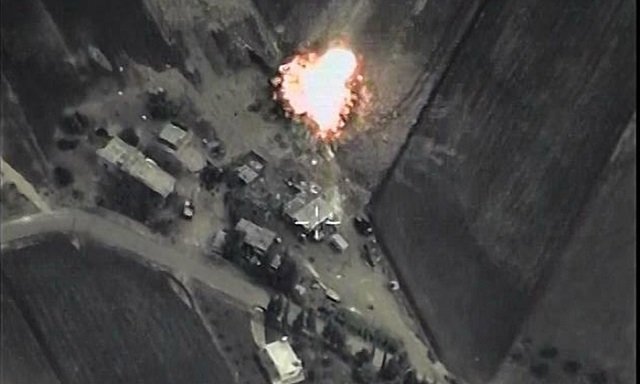 Russia’s bombing of rebel positions has angered countries in the region that have been trying to oust Syria’s Bashar al-Assad. Analysts say Saudi Arabia, Qatar and Turkey are now likely to increase military aid to the anti-Assad groups they support

Russian fighter jets launched from a new airbase in Syria have persuaded western critics to mute their demands for the removal of Bashar al-Assad, but another group of his opponents sees Moscow’s intervention as more provocative than decisive.

Regional powers have quietly, but effectively, channelled funds, weapons and other support to rebel groups making the biggest inroads against the forces from Damascus. In doing so, they are investing heavily in a conflict which they see as part of a wider regional struggle for influence with bitter rival Iran.

In a week when Russia made dozens of bombing raids, those countries have made it clear that they remain at least as committed to removing Assad as Moscow is to preserving him.

“There is no future for Assad in Syria,” Saudi foreign minister Adel Al-Jubeir warned, a few hours before the first Russian bombing sorties began. If that was not blunt enough, he spelled out that if the president did not step down as part of a political transition, his country would embrace a military option, “which also would end with the removal of Bashar al-Assad from power”. With at least 39 civilians reported dead in the first bombing raids, the prospect of an escalation between backers of Assad and his opponents is likely to spell more misery for ordinary Syrians.

“The Russian intervention is a massive setback for those states backing the opposition, particularly within the region – Qatar, Saudi Arabia and Turkey – and is likely to elicit a strong response in terms of a counter-escalation,” said Julien Barnes-Dacey, senior policy fellow at the European Council on Foreign Relations.

As the Syrian civil war has unfolded, Saudi Arabia has been clear about its position, say analysts. “Since the beginning of the uprising in Syria, the view in Riyadh has been that Bashar al-Assad must go. There is no indication what-soever that Riyadh will change this position,” said Mohammed Alyahya, associate fellow at the King Faisal Centre for Research and Islamic Studies in Riyadh.

“What is clear to Riyadh and its regional allies is that the recent Russian andIranian escalation will only create a more unstable region and spill more blood,” he said.

Riyadh has focused support on rebels in the south, say analysts, while allies Turkey and Qatar have reportedly backed northern rebels, including conservative Islamist militias such as Ahrar al Sham.

That group, in alliance with the al-Qaida affiliate Jabhat al Nusra, recently reached a local ceasefire deal with Assad in the north. Its success in taking on government forces is thought to have been one trigger for the Russian bombing campaign and put them among the jets’ first targets.

“Most probably, the coming efforts will focus on boosting the effectiveness of major coalitions, co-ordination and co-operation between the most influential and effective groups in Syria,” said regional analyst Ali Bakeer.

Concerns that Assad’s government could collapse, leaving a dangerous power vacuum, had persuaded the allies to support a push for a political transition as well as backing fighters, but the Russian bombing campaign changed that calculation, he said.

“There is a high-level, very close co-operation and co-ordination between Saudi Arabia, Qatar and Turkey. They are almost on the same page in Syria.”

Turkish support has been hampered by domestic turmoil, as it prepares, in effect, to rerun a controversial election after aceasefire with Kurdish groups collapsed. Qatar and Saudi Arabia, however, clearly have the funds, connections and political will to respond to Moscow’s escalation.

Saudi Arabia and Qatar are already embroiled in an expensive and bloody war in Yemen that may limit both their military and financial resources. They have also so far deferred to western bans on transferring hi-tech weapons – including missiles that could take down aircraft – over fears that they might change hands in the chaos of the war and be used against their makers.

“The uncertain question today is the degree of power combined with efficiency that regional powers will be willing to bring to the table,” said Barnes-Dacey. “Do the Saudis now try to take matters decisively into their hands, including by providing rebels with sophisticated weaponry long denied them?

“The new [Saudi] king [Salman] has shown a willingness to be much more assertive and take measures into the kingdom’s own hands. If the Saudis see the situation slipping out of their hands, and there is a real sense that the Iranians are consolidating their position in Syria, you could see much stronger response.”

That is unlikely to go as far as troops on the ground, however, and not only because so many assets are already tied up in Yemen.

“A Saudi military role would be too much of an escalation,” said analyst Hassan Hassan, author of Isis: Inside the Army of Terror. “It’s seen as far from Syria, not seen as a direct security threat. With Yemen, people have accepted [Saudi] hegemony for years, unlike Syria, where Iran is seen as dominant.

“The best way to respond to the Russian intervention is to engage the rebels more and step up support so they can face down the escalation and create a balance on the ground,” he said. “The Russians will [then] realise there are limits to what they can achieve in Syria, and modify their approach.” But the wider regional struggle for influence between Saudi Arabia and Iran makes it almost impossible for Riyadh to walk away, whatever the cost.

Saudi officials are particularly worried that the Americans might retreat from their strategy of containing Iran, following the landmark deal struck in July to curb Tehran’s nuclear programme in return for lifting international sanctions.

“Tensions really are escalating in the wake of the nuclear deal,” said Jane Kinninmont, a senior research fellow at international thinktank Chatham House. “Saudis feel that the US and the rest of the international community are doing nothing about this, and they are trying to be at the forefront of efforts to contain Iran.”

In this context, there may be a small amount of relief in Riyadh over the Russian role, as stepped-up importance for Moscow could edge out some of the Iranian influence.

“Is there a trade-off here? The more one has Russia, the less one has Iran. I imagine that’s one of the ways Russians are selling the idea to Saudis not to look at this negatively,” said Daniel Levy, Middle East and North Africa programme director at the European Council on Foreign Relations.

But, overall, the risks from escalation go beyond Syria, he said. “The degree to which Tehran and Riyadh are now in a confrontation mode across a number of regional hotspots is worrisome,” said Levy. “Who can act now as the de-escalating mediator?

“Americans are not in a position to do that, nor Russians, and Iran and Saudi Arabia are not sufficiently talking to each other … you’re now left with almost no one at senior levels on the respective sides who can engage with each other. This is going to be a dangerous place.”