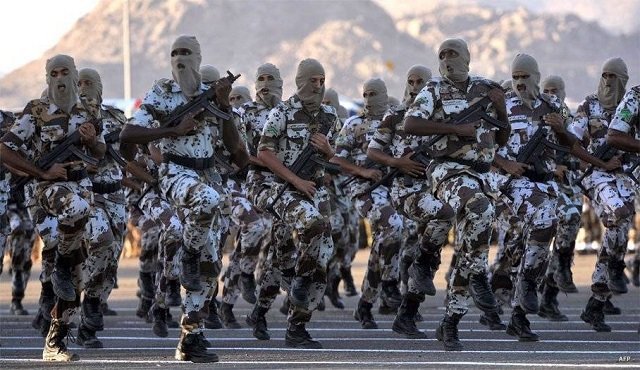 February 6, 2016 8:46 am 0
I am embarrassed to be an Arab
Angry Arab Countries May Not Be So Patient
Did Arab Enmity Towards Israel Make Us Any Safer?

Bahrain is ready to commit ground troops to Syria as part of a U.-S.-led coalition against Islamic State, the Gulf island state said on Friday, a day after its larger neighbor and close ally Saudi Arabia announced a similar pledge. Gulf Arab countries committing ground troops in Syria to battle Russia. IS has been weakened, as reported by a US intelligence report. Those Gulf troops going to Syria are most likely special forces armed with shoulder anti-aircraft missiles.

Bahraini ambassador to Britain Sheikh Fawaz bin Mohammed al-Khalifa said in a statement that Bahrain would commit troops to operate “in concert with the Saudis” under what he called the international coalition against terrorism.

He added that the United Arab Emirates, a fellow member of the Saudi-dominated Gulf Cooperation Council (GCC), was also ready to commit troops, echoing an assertion made late last year by UAE Minister of State for Foreign Affairs Anwar Gargash.

Saudi Arabia said on Thursday it was ready to participate in any ground operations in Syria if the U.S.-led alliance decides to start such operations, an adviser to the Saudi defence minister said.

The Bahraini ambassador said the Saudi initiative in Syria was meant to combat both Islamic State and “the brutal Assad regime”, a reference to President Bashar al-Assad, a bitter foe of Saudi Arabia.

Sheikh Fawaz also announced the GCC had decided to base a new unified GCC naval operations centre in Bahrain.

“The establishment of a joint (Gulf Arab) force shows clearly and unequivocally that under the leadership of Saudi Arabia, the Gulf states are determined to take positive action within the region and globally to combat terrorism and extremism, from whatever quarter they emanate,” he said.

Angry Arab Countries May Not Be So Patient
I am embarrassed to be an Arab
Tourism is Pretty Dead in the Arab World
Putin Terror 435 Support U.S. Allies 152 Syria News 1210

Loading...
Newer Post
Does Assad Really Think He is Going to Win the War?
Older Post
Without Obama’s OK, Putin Would Not Deliberately Target Syrian Civilians