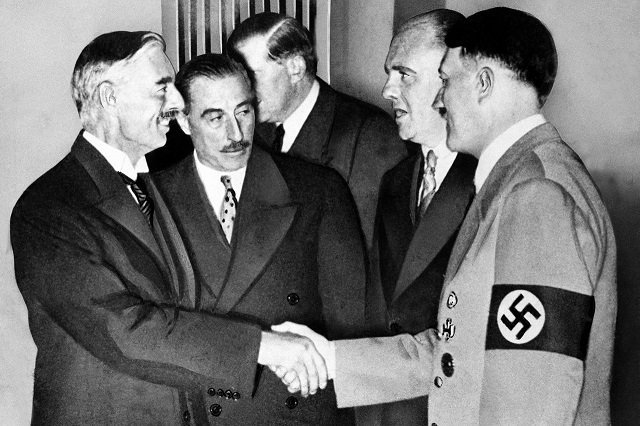 Falafel Interviews Obama About the Holocaust

Barack Obama is one of those presidents who has an opinion about everything. So much so that after his presidency is over, we believe he will render his opinion incessantly even if not asked for one.

Ever since Barack Obama said he was the “first Jewish President“, Falafel has attempted to interview him on a touchy subject matter called the Holocaust. Falafel got his chance. During his latest White House visit, Falafel interviews Obama about the Holocaust.

Falafel: “Mr. President, thank you. the topic today is the Holocaust”

Obama: “Before you ask me, I want to tell you that I decided to allocate a whole wall in my future library about this subject”

Falafel: “This is great news Mr. President. Will you show how the Jews were victimized just for being Jewish?”

Obama: “It will be more about explaining why the Holocaust happened.”

Falafel: “Can you be more specific?”

Obama: “Well, let’s say that it could have been avoided if only …”

Falafel: “You mean the Munich Agreement?”

Obama: “Exactly. Had Neville Chamberlain been a good negotiator the Holocaust would have never happened.”

Falafel: “Mr. President, are you implying your negotiations skills are the difference in the Iran Deal?”

Obama: “That’s exactly what I am saying. I want the Jews in Israel to know that because of my negotiations skills, they can sleep soundly with their doors unlocked.”

Falafel: “Do you think if Chamberlain had been a better negotiator, he could have stopped Hitler from committing his crimes?”

Obama: “Indeed. It is all about good negotiations at the end, not war or weapons or stopping mad men with fire and brimstone.”

Obama: “They are fascinated by smart men. Our intelligence turns them around. It’s that simple”

Falafel: “Can I say in my article that your intelligence and negotiating skills will be the difference in the Iran Deal and the reason why every Jew can sleep better in Israel?”

Obama: ‘Don’t forget also my aura and stardom. I am going to share a secret with you here.”

Obama: “After Valerie met with Khamenei, he asked her if he could have my autograph. The mad men are simply fascinated by my intelligence and negotiations skills.”

Falafel later wrote an article with the headline, “Khamenei asking Obama for autograph means Americans and Israelis are safe”

Falafel Interviews Obama About the Holocaust