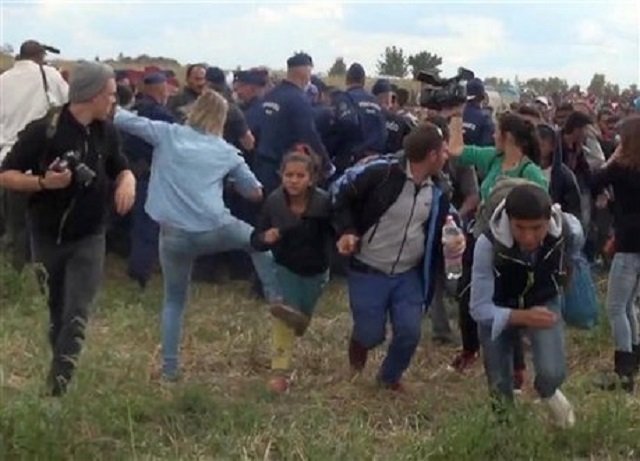 September 10, 2015 3:50 pm 0
How Can You Not Love Angelina Jolie?
Jared Kushner Anti-Israel Actions
Fuel Shortages Cripple Damascus and Beyond

Hungarian prosecutors said Thursday they had opened a criminal investigation for breach of peace against a Hungarian reporter caught on film as she tripped and kicked migrants who were fleeing border police.

In the footage, which sparked global outrage, Petra Laszlo can be seen tripping up a man sprinting with a child in his arms, and kicking another running child near the town of Roszke, close to the border with Serbia.

It later emerged that Hungarian reporter Laszlo, who was fired over her actions, had been working for N1TV, an Internet-based television station close to Hungary’s far-right Jobbik party.

“In the course of the investigation, the authorities will also examine if more serious crimes… can be established,” said Sandor Toro, the deputy chief prosecutor of Csongrad county.

A “Wall of Shame” page on Facebook featuring pictures, videos and commentaries linked to the incident involving Laszlo had gathered more than 30,000 likes by Thursday.

“You are a disgrace to your profession,” one user wrote.

The incident occurred as hundreds of migrants broke through a police line at a collection point close to the Serbian border where thousands have been crossing each day for the past month.

“These are shocking images. You’re part of a news agency. With your hand you’re shooting and with your leg you’re hurting someone else,” said Aniko Bakonyi of human rights group Hungarian Helsinki Committee.

The video showed Hungarian reporter Laszlo was “only kicking foreigners, no-one else, including a child who was clearly an asylum-seeker,” Bakonyi added.

“Since she’s been working as a cameraperson there, she clearly knew who she was kicking. It wasn’t by accident, there is no mistake in that.”

The Hungarian reporter Petra Laszlo herself has not yet reacted publicly to the storm.