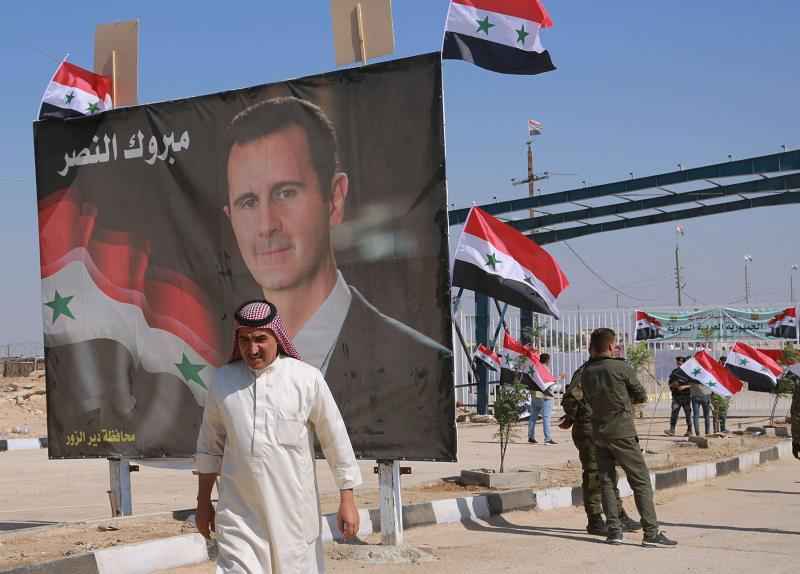 History is wrong. Yes, you read this right. History stinks. You know why? Because it claims that the Assad rule was a failure. Honestly, look around you. Damascus has electricity few hours a day, buses still work, and government employees are so efficient when you bribe them. We should all be celebrating the Assad family 50 year wonder with such awe and admiration.

OK. OK. We know what you are thinking. How could Syrians celebrate their country, which is in total physical and economic ruin? Those who seem to focus on the negative forgot that under the Assad family rule, Syria saw political stability for 50 years. Really, who wants to go through with what the United States is going through today? Two different men fighting for their supremacy in elections? Syrians are smart. They don’t bother with such trivial matters. The Assad family forever is the best thing that could ever happen to Syria. No question about it. One man gives to his child and so on .. Forever. Syrians are so lucky, they don’t even realize it.

So what if one offspring is mentally unstable or is too violent? That’s nature folks. That is Darwin telling us about his Natural Selection theory and Darwin, Syrians know for a fact, has selected the Assad family to rule Syria forever. As such, who are we to complain to the world? Syrians know how to play “Darwin Says”, which represents the adult game version of “Simon Says”, and we play it well.

There are those Syrians who believe the Assad family rule stinks. Especially, the one and unique Assad they are living under today. We are here to confirm the opposite. We believe the Assad family rule is the eight wonder of the world. You need to stop being so negative. It does not suit Syrians to rebel because the Assad rule has been decided a long time ago. Therefore, we must all accept it and live with its wonderment and enlightened path. Bow your heads and be thankful, you miserable lot!!!

You say Assad is too violent or too stupid? That he gasses women and children? What a bunch of cry babies you are!! Assad relieved these women and children from their miserable existence and this is how you pay him? By accusing him of war crimes and mass murder. Just imagine for a moment these Syrian women and children one day becoming old and decrepit, hardly surviving under severe economic conditions. Would you want to see your own grandmother suffering in her old age? See? Assad gassed women end children to save them from old age. All Syrians owe him an apology for their hollow accusations.

In fact, we say that most of the accusers have no vision. They do not see in the future the way this Assad does. Remember when came up with the slogan “Assad, or we burn the country”? Told you he can see in the future.

The naysayers also accuse him of stealing every Syrian Lira he can lay his hand on to include most of the oil revenues. So what? How do you expect him to rule with an iron fist if he could not buy loyalties all around him? How could he ask his generals to drop sarin on sleeping women and children if he cannot pay them handsomely for their work? You did not think of that, did you? Assad has no choice but to enrich himself otherwise he could not rule so efficiently and become the most revered leader Syria has ever witnessed. So, stop being negative. You are not helping Syrian refugees coming home when you keep attacking Assad. Love him and see how things would go back to normal again. The good old days when no one knew about his torture and his dungeons of death.

What a dumb move on your part to think that you could change Syria for the better if only you revolted against Assad? What did this get you? He is still there and most of your family is not. Learned your lesson yet? Never, ever again rise against Assad because his supporters are too strong and his detractors are too coward. One day, they say “Assad must go” and another day they make a deal with him. Just embrace the inevitable, dungeons and all. Think of them as free spas to cleanse your soul, and stop whining.

After 50 years of the Assad rule, don’t you think you should start planning for the next 50 years? Talk to your children. Tell them what they should expect from their miserable lives. Lower their expectations about the detriments of real democracy and the rule of law. Alleviate their suffering by telling them the truth about how great it is to live under the Assad rule for the next 50 years. Tell them that if Assad tortures them or kills them, it is for their own good.

Just imagine, tell your children, Assad has locked up all the Islamists in his jails. In addition to some of your cousins who are not. Let them understand his value. So what if they don’t have freedom or live impoverished all their lives with no access to education? As long as they can maneuver a donkey cart in narrow alleyways, they will have a job. And if they can torture people, they would have even a better job earning them a piece of lamb once a month and the possibility to extort money from their families. Do so and you would qualify for the “Assad Father of the Year” award. No kidding.

Just embrace the inevitable. 50 years of past Assad rule and another 50 years coming up.

Syria is in good hands and doing great, thank you.