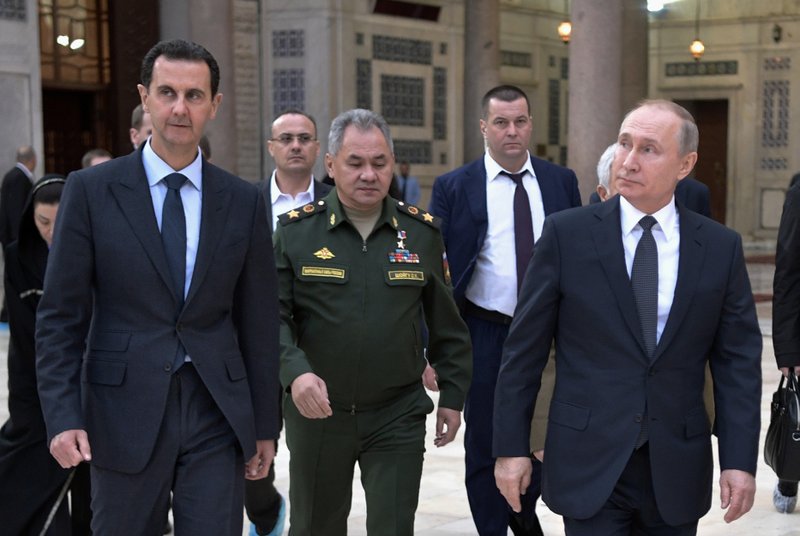 January 11, 2020 7:28 am 0
Putin Escalating Idlib Civilian Attack Because Trump is Commander-in-Chief
The All-Russian Vodka Constitutional Amendment
Showdown in Turtle Bay Between the West and … the Soviet Union

Russia scored a victory for its close ally Syria on Friday, using its veto threat to force the U.N. Security Council to adopt a resolution significantly reducing the delivery of cross-border humanitarian aid and cutting off critical medical assistance to over one million Syrians in the northeast. In effect, barbaric Putin starves Syrian civilians with its threat of a veto. The west responds with anger, but no action. Should not the west charge Putin with war crimes for starving civilians?

Britain’s U.N. Ambassador Karen Pierce accused Russia of playing politics with humanitarian aid for the first time in the nearly nine-year Syrian conflict, and “playing dice with the lives of Syrian people in the northeast.”

U.S. Ambassador Kelly Craft accused Russia of “triumphantly” supporting Chemical Assad’s government “to starve its opposition.” And she warned: “Syrians will suffer needlessly … (and) Syrians will die as a result of this resolution.”

The resolution adopted by the U.N.’s most powerful body reduces the number of crossing points for aid deliveries from four to just two, from Turkey to the mainly rebel-held northwest as Russia demanded. It also cuts in half the year-long mandate that has been in place since cross-border deliveries began in 2014 to six months, as Moscow insisted.

The vote capped months of contentious negotiations. It came on the day the current mandate for cross-border aid deliveries to Syria expires. It also reflected the deep divisions that have prevented the Security Council from taking any action to end the Syrian conflict.

Indonesia’s deputy U.N. ambassador Muhsin Syihab, who voted in favor of the resolution, said afterward he believed all council members were “equally unhappy.”

Germany, Belgium and Kuwait, backed by the U.S., Britain, France and other council nations, initially wanted to add a fifth crossing point and extend the mandate for a year. But to meet Russia’s demands and avoid a total cutoff of cross-border aid they watered-down their resolution to two points for six months.

Russia’s U.N. Ambassador Vassily Nebenzia said that cross-border aid was meant to be temporary. He claimed that the situation on the ground has changed. He said the Jordan crossing point hasn’t been used “for a lengthy period of time”. Further, he added the volume through the Iraqi crossing “is insignificant … and could be done from Syria”. So only the Turkish crossing points are needed — points he reiterated on Friday.

U.N. humanitarian chief Mark Lowcock told the Security Council in November that the U.N. provided 1.1 million people with food through cross-border deliveries in October, double the number in January.

“There is no alternative to the cross-border operation,” he stressed. “There is no Plan B.”

The Assad regime confiscates all UN aid earmarked for the starving Syrians. This is why cross-border aid deliveries are necessary.

Germany’s U.N. Ambassador Christoph Heusgen, who co-sponsored the resolution, stressed “the heavy price” it came with. He appealed to Russia to get more than eight trucks with medical aid waiting in Iraq into northeast Syria. Putin has been bombing hospitals and schools.

Craft, the U.S. ambassador, said all U.N. officials agree that the humanitarian situation in Syria is worsening. She called the watered-down resolution demanded by Russia “shocking, comprehensive indifference to human suffering.”

She said: “In abstaining, we are lending a voice to four million Syrians entering the heart of winter.”

Pierce, the British ambassador, said: “We won’t vote to stop vital aid from reaching Syria, but neither will we vote in favor of a resolution that reduces aid provision to vulnerable populations and puts lives at risk.”

Nebenzia said he abstained even though Russia got just two crossing points from Turkey because Moscow didn’t agree with everything in the German and Belgium sponsored resolution. Russia starves Syrian civilians for language reasons.

Syria’s U.N. Ambassador Bashar Ja’afari, a Goering-like figure, just made a fool of himself. Again.