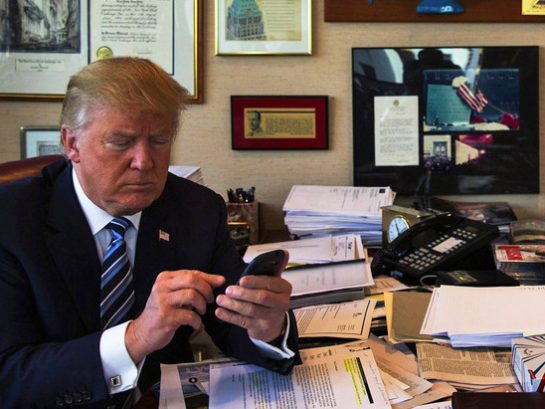 Being the right person at the right time makes for a successful life. So did Falafel think as he slipped into the Oval Office waiting to hear what Trump had to say to Putin during a planned conversation Putin was asking for. It did not take long. With utmost certainty, Falafel heard Trump Putin phone call.

The President had Putin on the speakerphone in no time. It was the first time Falafel ever heard Putin speak with his broken English.

Trump: Be careful Vlad. Those intel agencies might be listening.

Putin: No worry Mr. President. We jam call from Russian Embassy. We have good hackers. Da?

Trump: Are you sure? Because I need to tell you important things.

Putin: I call you, no? Give me good news.

Trump starts reciting the President’s Daily Briefing he received this morning from the CIA. Some of the U.S. top secrets go into that briefing.

Trump: Anything else you want to discuss?

Trump: OK, but what do I tell my stupid followers?

Putin: Tell them you want to save American jobs. Like always. Soglasovano?

Trump: Done. Anything else?

Putin: No weapons to Ukraine Don. Ukraine is for Russia. Ty menya slyshish my friend?

Trump: I hear you Vlad. No more weapons to Ukraine.

Trump: Yes. It was a good strike.

Putin: It was good because people say you are not friend with me. He bombed Assad it means he is not friend of Putin. Da?

Trump: It worked for sure. When can I see the contract?

Putin: Oh, my friend, you are much hurry. Contract is good. Big tower. Obeshchaniye. OK?

Trump: I would leave the presidency tomorrow if I can build my  Moscow Trump Tower. You know that, don’t you?

Putin: Patience my friend. No yet leave. Mother Russia needs you. Da?

Trump: What do I tell the press about this call?

Putin: Say you screamed me for poison on Skripal.

Trump: OK. Oh, by the way, I have new beautiful set of drawings for the Trump Tower in Moscow. Shall I send them to you?

Both Trump and Falafel heard a big click. Putin hanged up.

Falafel was stunned by the call. Trump is a traitor delivering our top secrets and taking orders from Putin. Syria? It was Putin’s demand and Trump accommodated him fully.