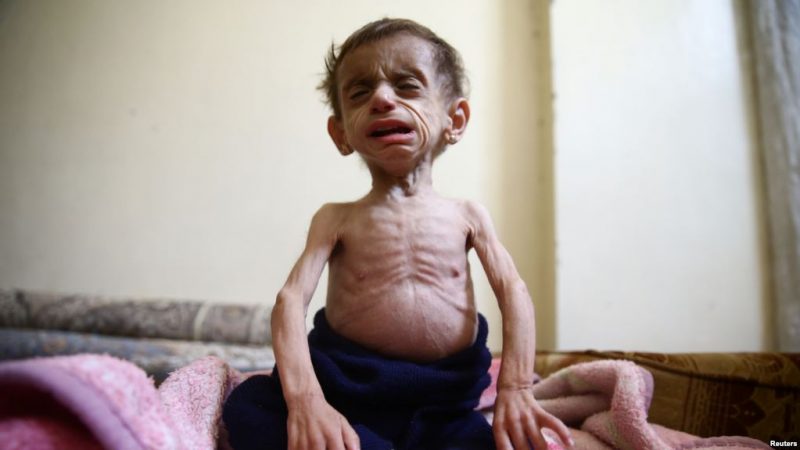 Deliberate Starvation of Civilians in Syria Could Be War Crime

October 28, 2017 10:55 am 0
Between the Holocaust and Assad
Syria: Army Using New Type of Cluster Munition
We are Syria’s moderate opposition – and we’re fighting on two fronts

Source: VOA (Deliberate Starvation of Civilians in Syria Could Be War Crime)

GENEVA — The U.N. High Commissioner for Human Rights, Zeid Ra’ad Al Hussein accuses the Syrian government of denying food and medical supplies to hundreds of thousands of civilians besieged in Eastern Ghouta, on the outskirts of the capital Damascus.

Eastern Ghouta has been under siege by Syrian Government forces for more than four years. At least 350,000 civilians are trapped there without access to life-saving aid.

UN human rights chief, Zeid Ra’ad Al Hussein calls the refusal to allow badly needed food and medical supplies to get into the area an outrage. He says shocking images of severely malnourished children that have appeared in recent days indicate the people of Eastern Ghouta are facing a humanitarian emergency.

The High Commissioner’s spokesman, Rupert Colville, says varied armed groups controlling the area also are interfering with the work of humanitarian organizations. He says clashes between these groups have limited the ability of civilians to move around freely within the region for months.

“So, the armed opposition groups are also very much part of the problem,” said Colville. “The parties to the conflict must allow the free, regular and unimpeded passage of food and other humanitarian relief and not take actions that would deprive civilians of their right to food and health.”

Colville says U.N. aid convoys last reached Eastern Ghouta in late September. However, he adds the Syrian Government only allowed food and other relief to be delivered to 25,000 people in three towns. The U.N.’s request to assist other besieged and hard-to-reach areas was refused.

“The High Commissioner is reminding all parties that the deliberate starvation of civilians as a method of warfare constitutes a clear violation of international humanitarian law, and may amount to a crime against humanity and/or a war crime,” said Colville.

Human rights chief Zeid is also calling on all parties with influence in the conflict to make it easier for humanitarian workers to gain access to Eastern Ghoutta to alleviate the plight of this desperately needy population.

The High Commissioner did not single out any country by name, but countries that have sway with the Syrian regime and/or with some of the rebel groups include Russia, the United States, Iran and Turkey.

Deliberate Starvation of Civilians in Syria Could Be War Crime

Loading...
Newer Post
Only the Threat of Severe Russian Sanctions Will Save Syria From the Clutches of Iran
Older Post
Britain calls for UN sanctions on Syria over sarin attack