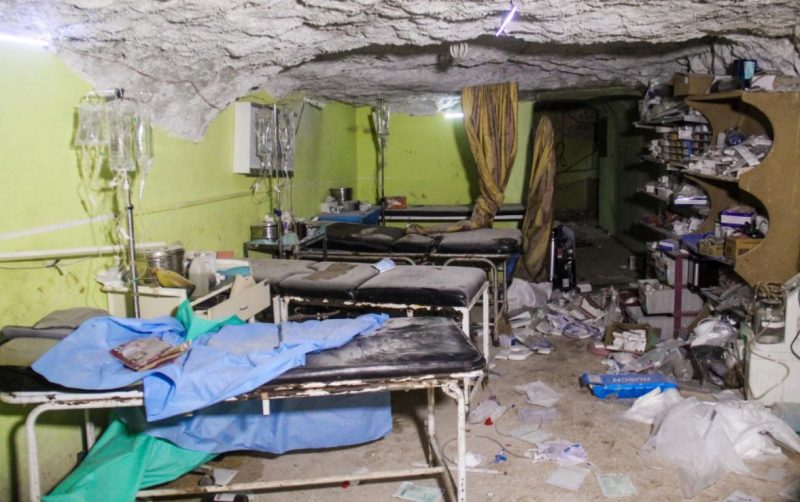 Britain calls for UN sanctions on Syria over sarin attack

Source: The Telegraph (Britain calls for UN sanctions on Syria over sarin attack)

Britain on Friday urged the United Nations Security Council to impose sanctions on Syria after a UN-led investigation found that government forces were responsible for the sarin gas attack on Khan Sheikhun.

A joint UN-Organisation for the Prohibition of Chemical Weapons (OPCW) panel said the Syrian air force had dropped a bomb on the opposition-held town on April 4, releasing the deadly nerve agent that killed more than 80 people.

“It now falls on the Security Council to act on these findings and to deliver justice.

“Britain is in talks with the United States on a draft resolution that would impose sanctions on Syria, the ambassador said.>

Such a measure, however, would likely face a veto from Russia, an ally of President Bashar al-Assad.

Russia questioned the findings, citing many “inconsistencies” in the report and criticizing the expert investigators over the use of “doubtful witness accounts and unverified evidence.”

Moscow has maintained that the sarin attack was most likely caused by a bomb set off directly on the ground, not by a Syrian air strike.

Britain has accused Moscow of “covering up” for Syria and Rycroft said Russia must “find their moral compass” and support accountability for the Khan Sheikhun attack.

US Ambassador Nikki Haley said after the report was sent to the council on Thursday that the top UN body must send a “clear message” that the use of chemical weapons will not be tolerated.

“Syria’s blatant disregard for international norms and standards should be met with condemnation and accountability by all members of the international community,” State Department spokesman Heather Nauert later emphasized in a statement.

After a previous report by the same panel found that Syrian forces had used chlorine in attacks in 2014 and 2015, Britain, France and the United States pushed for sanctions, but China and Russia vetoed that resolution.

French Ambassador Francois Delattre said the priority now was to “recreate a consensus” at the Security Council on how to address Syria’s use of banned poisonous gases in the six-year war.

On Tuesday, Russia vetoed a US-drafted resolution that would have extended by a year the mandate of the panel, known as the Joint Investigative Mechanism (JIM).

Russia said it wanted to study the report on Khan Sheikhun before deciding whether to extend the JIM, which it helped set up in 2015 jointly with the United States.

The French ambassador said the panel must be allowed to continue its work, suggesting that the council could vote again on its renewal before its mandate expires on November 17.

“The JIM is not a tool of the West. It is a common asset of the international community,” said Delattre.

Sweden, a non-permanent council member, said it would try to convince Russia to not block the work of the experts on chemical weapons.

“This is difficult,” said Swedish Foreign Minister Margot Wallstrom, who was in New York to attend a debate on women’s role in peace and security.

“We have to convince the Russians not to veto the next steps.”

The council will discuss the report’s findings on Khan Sheikhun on November 7.

Britain calls for UN sanctions on Syria over sarin attack