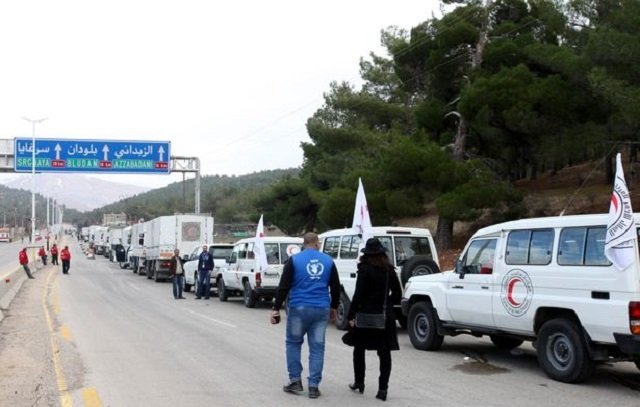 Assad May Be Controlling Food Delivered to Madaya

NGO’s have this bad habit of believing the words of dictators like the psychopath Baschar al-Assad. After all the international outrage over the starvng of Madaya, Assad may be controlling food delivered to Madaya.

The U.N. refugee agency said local people in Madaya were involved unloading and distributing the food they received.

Asked if the United Nations was confident that the food wasn’t simply being intercepted and confiscated by fighters, UNHCR representative in Syria Sajjid Malik said: “The way it was handled we could see that it was a very broad community engagement … they assured us it was going to be distributed to the population.”

Assad assured the United Nations the food was going to be distributed. Is UNHCR and WHO kidding us?

In another instant, activists on the ground said the people of Madaya had dismissed the head of the town’s military council because he tried to put the newly delivered aid in warehouses. Probably to sell to Hezbollah selling back one kilo of rice at $300.

Elizabeth Hoff, the WHO representative in Damascus who went into Madaya with the convoy, said medical staff had told her that mothers had no milk for breast-feeding and many malnourished people were too weak to leave their homes.

“I sent an immediate request to authorities for more supplies to be brought in. We are asking for mobile clinics and medical teams to be dispatched,” she said.

Doctors said patients preferred to spend what little money they had on food and not health care, Hoff said. Rice was on sale, but at $200 or $300 a kilo.

At a field hospital, Hoff said, doctors “had to give a drip to a patient outdoors because there was no room in the clinic”.

“An elderly lady had not eaten for 20 days, she was picked up unconscious on the street and brought in.”

Hoff said she had spoken with a severely malnourished man who could hardly talk, was totally dehydrated and had turned yellow in colour.

We will find out in the next two days whether the food reached its destination. Not Madaya, but the stomachs of those hungry and innocent women and children suffering from the Assad and Hezbollah terror.

Assad May Be Controlling Food Delivered to Madaya