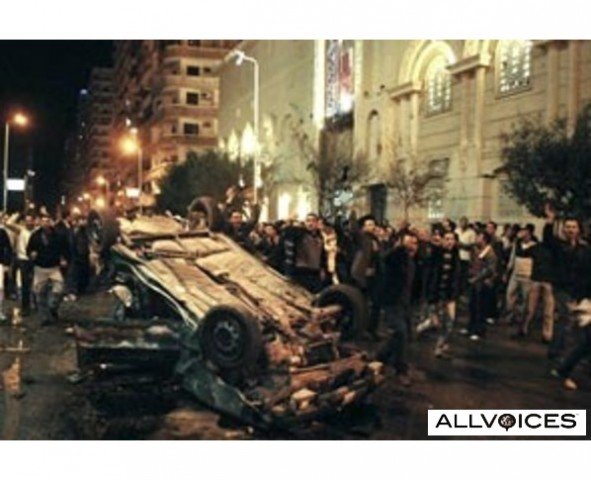 The minorities in the Middle East are under siege by Islamists who, finding it more difficult to terrorize the U.S. and, to a certain degree, Europe, have turned their violence against the low hanging fruit one finds in pacifist and unprotected Christian communities. Extreme Muslims simply cannot stop their terror, even against indigenous people who neither occupy nor oppress. Those extremists who use violence against the innocent represent the absolute low in human decadence and rot. We must save the Christians in the Middle East.

The horrific scenes in Alexandria and Baghdad is a reminder of what oppression produces. Nothing is more dangerous than a hungry Muslim youth whose voice is muffled and whose zest for life emanates from the misinterpreted words of the Quran. It was just a question of time before extremism bullied an army of foot soldiers into committing unimaginable acts. Save the Christians.

Under this scenario of Arabs committing acts of violence against other Arabs, should we be surprised that majority non-Arab Israel is unwilling to allow the Palestinians, some very prone to extreme violence, to co-exist in an independent State without their watchful eye? It’s not much different from Assad allowing al-Qaeda Muslims, on the basis of the Omayyad history, to erect their own city in Damascus and outside his control. Save the Christians of The Middle East.

But a successful strategy for the minorities to protect themselves has already been demonstrated by the Maronites of Lebanon.Â  Their survival and ultimate prosperity depended on deterrence through strength and on manifesting a capability to fight fiercely for their rights without oppressing others. It also depended, somewhat, on reinforcing a geographic perimeter to keep harm from encroaching into their living space. These options may not be available in an extreme authoritarian state like Syria, but the Egyptian and Iraqi governments may be more amiable to concepts of perimeters, belts, and security walls. Save the Christians of The Middle East.

As witnesses to the horrors of Alexandria and Baghdad, it is obvious that today’s standard model for protection of the Christian and other minorities in the Middle East, within the confines of absolute authority, should be of concern to the international community because it relies on others to secure their safety and environments. Secular Arab governments, such as Syria, Egypt, and Iraq (i.e. prior to Saddam’s demise) proffer that security cushion within the umbrella security state they rule. Save the Christians of The Middle East.

In the absolute, these arrangements seem sensible; they alleviate many burdens the Christian community would rather not confront. But, in reality, handing one’s security to a State that may or may not be up to the task, or one that may or may not exist tomorrow, is ill-advised. Namely, the community finds itself unable to protect its people at any one point in time as we are witnessing today and also totally unprepared having relied on others for survival. Save the Christians.

Moreover, when a sheltering State falters in its protection, the minorities get exposed to not only the inhumane actual act of terror but also to the post-act discovery that the world community is quick to console but is unwilling to commit more than sweet words and some aid in some cases. Syrians experience this on a daily basis in the form of lip service whenever the Assad terror machine kills and maims our people. Save the Christians.

The rule of oppressive Arab States, with its capacity to foster extremism, has created new realities on the ground. Under these circumstances, any minority group has every right to defend its very own existence when the laws of the land cannot provide the minimum level of security. Save the Christians.

The British, who carved the Middle East to forge or administer regional conflicts ad libitum, inadvertently handed that advantage to violent Islamists with targets that will not quench their thirst for terror for 100 years to come. Christians better be prepared to fight for their rights rather than passively rely on others or seek acceptance and co-existence with the majority Muslim population.Â Offending the moderate or any other Muslim community, by asserting your rights for survival, should be your last concern; most moderate Muslims understand and support you as long as extreme Islamists remain savagely violent and the so-called Muslim secular rulers are incapable of protecting you from a slow and persevering Genocide.