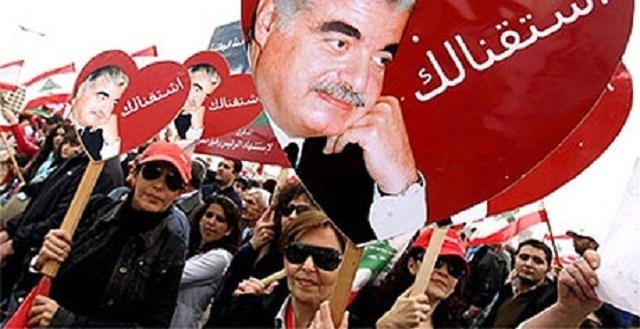 Assad Has Yet to Pay for Assassinating Rafik Hariri

February 14, 2016 6:51 am 0
Obama is mimicking the savagery of Assad
When Community Organizers Claim To Be Leaders
Of Constantinople, Serbia & Syria

Lebanon marks on Sunday the eleventh anniversary of slain former Prime Minister Rafik Hariri, who was assassinated on February 14, 2005 by Hezbollah under orders from Baschar al-Assad. Assad has yet to pay for assassinating Rafik Hariri.

This year’s commemoration is marked amid conflicting reports whether any of the March 14 figures will boycott the event in light of the latest differences over the controversial file of the presidency.

Unnamed sources told the daily that Lebanese Forces chief Samir Geagea will attend the celebration and that he will be represented by his wife MP Sethrida Geagea and a number of LF deputies.

Geagea endorsed his long time rival of the March 8 camp Change and Reform bloc MP Michel Aoun for the presidency in what observers saw as a reaction to Mustaqbal head Hariri’s proposal to nominate Marada Movement chief MP Suleiman Franjieh for the post. In effect, all these Lebanese leaders fear for their lives as long as the psychopath Assad remains in Damascus.

The Mustaqbal chief arrived in Beirut at dawn on Sunday to take part in the commemoration that will held at 4:30 at BIEL.

The Feb. 14 assassination killed Hariri and 21 others and wounded more than 200 people, stunning a nation long used to violence. The charismatic billionaire businessman was Lebanon’s most prominent Sunni politician. He was credited with rebuilding downtown Beirut after the ravages of the 1975-90 civil war and of uniting a divisive nation.

The massive explosion that tore through his convoy on the Beirut seaside 10 years ago sent a tremor across the region and unleashed a popular uprising that briefly united the Lebanese and ejected Syrian troops from the country. But a decade later, and despite millions of dollars spent, justice remains elusive in a case that has been overshadowed by more recent turmoil. Assad has yet to pay for assassinating Rafik Hariri.

Five Hizbullah suspects are being tried in absentia by the Special Tribunal for Lebanon based in The Hague.

Hariri was a great leader. TFS regrets his loss to Lebanon and the international community that respected him.

May he rest in peace.

Assad Has Yet to Pay for Assassinating Rafik Hariri