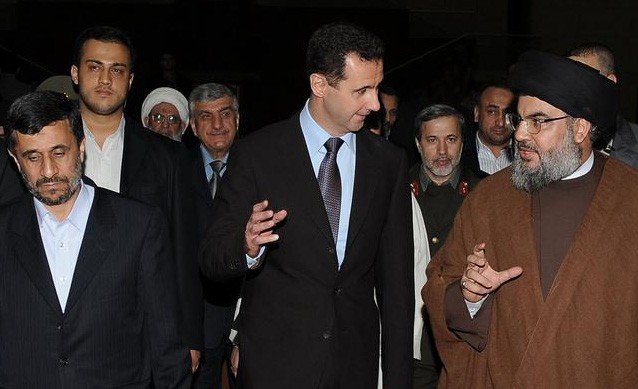 Saving Assad will come back to haunt us one day

November 12, 2014 8:25 am 0
A Loosening Grip
Mirror, Mirror on Syria, Who Has Released Jabhat al-Nusra Bacteria?
Assad Massacres 25 Women and Children in Douma

Andrew McCarthy wrote a piece for National Review that has all the elements of understanding terror but not Syria as a country even though, between the terrors of ISIL and Assad, the two are connected today. The article, indirectly, supposes saving Assad is the only alternative.

The Syria-Iran propaganda machine is far superior to anything a western writer or analyst is able to defend against it. What we think is true is not, and what we think is wrong, is true. The truth writers sometimes embrace, in fact, is fabricated by Syria and Iran and we seem to swallow it as a cat swallows a canary. In writing his article, McCarthy may have forgotten this minor detail.

Syrians, like Lebanese, come in all shapes and forms. Syria is closer to Lebanon and Israel in terms of its religious diversity. If the Lebanese can co-exist peacefully, so can the Syrians if given the chance to amputate Assad and his clique from the Syrian Government. Do Christians in Lebanon need to defend themselves from the Lebanese moderate Muslims in Government? Many do need to defend themselves from Assad.

There are 350,000 Sunnis hiding in Tartous and Latakiya (Assad Alawite strongholds). Are they moderate or not? The day Syria is free from Assad, they will all cheer his departure, and so will many Alawites. Fear cripples people.

I agree with McCarthy that we cannot trust Barack Obama of doing what is right for America in Syria. Besides, Obama maybe saving Assad and he could care less about Syria, or even our allies. All he wants is to court Khamenei for his own personal reasons. However, I do trust the military and the intelligence branches of the US Government to get it right now that they understand what the MB is capable of if it governs. Their experience combatting AQ accords them that right. Therefore, if the CIA is still working on the ground to train moderate forces to combat Assad, we should put a little trust in it instead of writing articles as if Assad dictated the copy.

Besides, I know personally of many Syrian moderates in the Free Syrian Army that remain loyal to western values even though they have been ignored by Obama, which gave rise to Islamic terror.

For heaven’s sake, Assad wants the west to believe there are no moderates because they are the biggest danger to his rule. Don’t fall for his ruses so easily.

Set this argument aside, and start to think about what it means saving Assad if he wins the war we seem to be helping him win.

First, Iran may be building a new Hezbollah force in Syria to emulate the success of Hezbollah in Lebanon. Accidental pro-Assad writers are ignoring that Iran is not standing still as we focus on ISIL. Unless AQ and ISIL bell ringers could care less about Israel.

Second, has any one given a thought to what Assad might do to his opponents outside Syria who cheered the Syrian people on now that he has destroyed his opponents inside Syria? Who can forget Assad killing so many Christians in Lebanon, or assisting Hamas with his rockets to rain terror on Israel? Is that the alternative we wish for, or should we go looking for the Syrian moderates to shore them up instead of doing Assad’s bidding?

Saving Assad will come back to haunt us if we permit ourselves to lose sight of both Sunni and Shia terror simultaneously. It seems Sunni terror is grabbing all the headlines today, and while doing so, Iran is quietly expanding its own terror machine across several countries.

ISIL should not have its Islamic State and Assad should not be permitted to stay in power. Losing sight of one at the expense of the other will not uproot terror.

Saving Assad will come back to haunt us