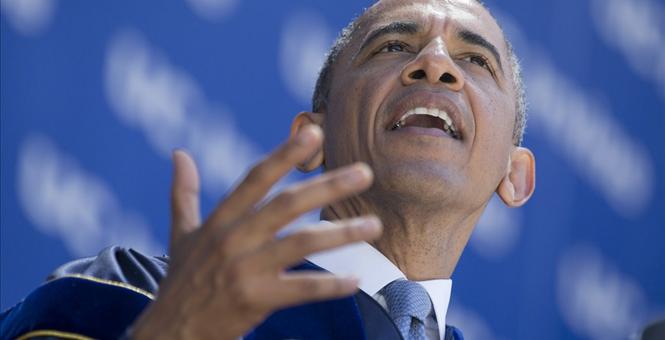 U.S. President Barack Obama urged Russia on Sunday to stop bombing “moderate” rebels in Syria in support of its psychotic ally Bashar al-Assad, a campaign seen in the West as a major obstacle to latest efforts to end the war. In the eyes of Putin, does Barack Obama matter anymore to respond to his request? Without an army to back his threats, the US president has no leverage against Putin whatsoever.

Major powers agreed on Friday to a limited cessation of hostilities in Syria but the deal does not take effect until the end of this week and was not signed by any warring parties – the Damascus government and numerous rebel factions fighting it.

Russian bombing raids directed at rebel groups are meanwhile helping the Syrian army to achieve what could be its biggest victory of the war in the battle for Aleppo, the country’s largest city and commercial center before the conflict.

There is little optimism that the deal reached in Munich will do much to end a war that has lasted five years and cost 250,000 lives.

The Kremlin said Vladimir Putin and Obama had spoken by telephone and agreed to intensify cooperation to implement the Munich agreement. The Munich Agreement does not call for Assad to go, which is in direct violation of four different UN Resolutions the United States has fully supported.

But a Kremlin statement made clear Russia was committed to its campaign against Islamic State and “other terrorist organizations”, an indication that it would also target groups in western Syria where the Free Syrian Army are fighting Assad in close proximity to rebels deemed moderate by the West.

Russia says the “cessation” does not apply to its air strikes, which have shifted the balance of power toward Assad.

It says Islamic State and the al Qaeda-affiliated Nusra Front are the main targets of its air campaign. But Western countries say Russia has in fact been mostly targeting other insurgent groups, including some they support.

The White House said Obama’s discussion with Putin stressed the need to rush humanitarian aid to Syria and contain air strikes. Does Barack Obama matter anymore for Putin to listen to his please?

“In particular, President Obama emphasized the importance now of Russia playing a constructive role by ceasing its air campaign against moderate opposition forces in Syria,” the White House said in a statement.