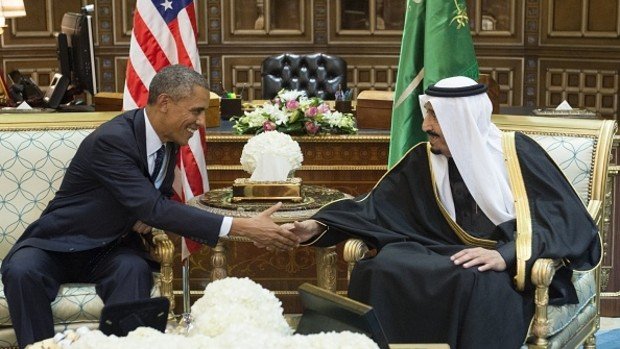 May 12, 2015 10:11 am 0
ISIS Reaches US Because of Obama’s Iran Deal
Even Obama’s Former Top Syria Guy Thinks The ISIS Strategy Is Aimless
Obama’s Syria Policy Isn’t a ‘Mistake.’ It’s Deliberate.

RPS Note; Who would blame them? Every Arab Ambassador in Washington has had almost 7 years of history dealing with Obama and his crew. They must have a history of lying from this administration to guide them towards future relations with Obama. Read it and weep.

Leaders from six Gulf Arab nations will assemble at Camp David this week to ask Barack Obama for security guarantees against Iran. It’s an awkward moment for the members of the Gulf Cooperation Council, or GCC. They are seeking commitments from a man whose signature foreign policy achievement would allow Iran to keep much of the nuclear infrastructure Obama once promised to roll back.

But here we are. Traditionally, the way a great power protects its friends from a regional bully is through deterrence. It goes like this: The U.S. makes it clear that picking a fight with Bahrain or the United Arab Emirates or Saudi Arabia is the equivalent of picking a fight with America.

Yosef Otaiba, the ambassador to the U.S. from the United Arab Emirates, told the Atlantic Council last week the GCC will be seeking “something in writing,” and a more formal version of what he said was a “gentleman’s agreement” to protect the security of the Gulf states.

On Friday, after meeting with Saudi Arabia’s foreign minister in Paris, Kerry said, “we are fleshing out a series of new commitments that will create, between the United States and the GCC, a new security understanding, a new set of security initiatives, that will take us beyond anything that we have had before in ways that will ask our partners to work with us, and they will contribute and we will contribute.”

Obama, despite his proclivity for ending “dumb” wars and such, is a big fan of deterrence. In 2014, he committed American power to the defense of the Senkaku Islands, a chain administered by Japan but challenged by China. In a tour of Eastern Europe last year, he assured Estonians that NATO’s commitment to their small country’s security was “unbreakable,” “unwavering” and “eternal.”  The U.S.-Israel bond? Also unbreakable.

But with Obama, sometimes the rhetoric doesn’t match the reality. For example, after withdrawing all U.S. combat troops from Iraq, he insisted many times that he was committed Iraq’s security. Yet it was not until the Islamic State had taken over Iraq’s second-largest city, Mosul, that Obama began his air war against the terrorists.

In Syria, after the dictator Bashar al-Assad was confirmed to have used chemical weapons — crossing Obama’s “red line” — the White House backed down, settling for a Russian-backed deal to remove Syria’s stockpiles. Obama has continued to stay out of the civil war, despite pleading from Arab allies to intervene, and recent evidence that Syria is still conducting chemical attacks on its opposition.

When Russia destabilized Ukraine in 2014 with its badly disguised special-operation forces in Crimea, Obama did not seek to enforce the 1994 Budapest Memorandum. That agreement had committed Russia, the U.K.  and the U.S.  to safeguard Ukraine’s territorial integrity in exchange for the Kiev government giving up its nuclear weapons.

Which brings us to this week’s conference in Maryland’s Catoctin Mountains. Obama will need to convince his guests that he means what he says. Whatever he offers the Gulf States in arms sales and security guarantees will have to be enough to dissuade them from launching nuclear programs of their own. The Saudis have hinted for more than a year that a recognized Iranian right to enrich uranium should also apply to them.  Obama needs the Saudis — including King Salman, who decided on Sunday to skip the summit —  to trust that he has their back.

But that’s easier said than done. Obama has less than 18 months left in his presidency and he is making the kind of long-term deals with Iran and Saudi Arabia that will last well after he is out of office. It’s not merely a hypothetical question. President George W. Bush’s commitment to Israel to allow construction within some West Bank settlements, so long as the perimeters of those settlements did not expand, was overturned in 2009 after Obama reviewed the policy.  And as Republican Senator Tom Cotton made clear in his open letter to Iran’s mullahs, Congress may seek to nullify any Obama-Iran nuke deal that doesn’t get treaty ratification.

All of this brings to mind a favorite maxim of Israel’s former prime minister, Menachem Begin. During Camp David peace talks that led to Israel’s withdrawal from the Sinai, Begin was offered U.S. security guarantees in exchange for territorial concessions. Begin mused: “In the whole world there is no guarantee that can guarantee a guarantee.” America’s Gulf allies are about to find out if Begin was right.