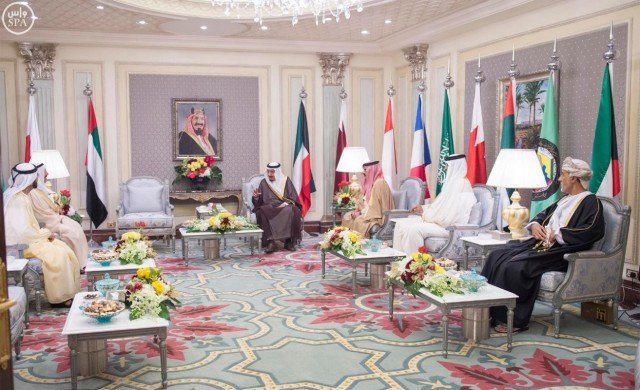 A Syria for Iran bargain at the U.S.-GCC summit?

May 8, 2015 12:17 pm 0
Let States Do the Job Obama Won’t: Sanction Iran
Evil White House Voodoo
What Has Obama Done to Stop the Boycott Movement Against Israel?

TFS Note: We beg to differ with Ms. Karam. The GCC priority would be self-preservation from Iranian aggression around their borders. They will request a security pact with the US to protect their interests. Syria will come up within the larger context of Iranian behavior.  Nonetheless, the article is worth reading.

With all eyes on Washington ahead of next week’s summit between U.S. President Barack Obama and America’s traditional allies at the Gulf Corporation Council (GCC), it is the Syrian crisis that could shape its outcome without being officially on the agenda.

The Gulf leaders, who have been disappointed time and again with the Obama administration’s reluctant approach to Syria, see, according to diplomatic sources in Washington, an opportune strategic moment for requesting U.S. support on Syria in return for theirs on an Iran nuclear deal.

For the White House, the two-day-summit is meant to assure the Gulf states on U.S. commitment to their security, and that any Iran nuclear deal is neither a realignment nor an abandonment of the Middle East. But for the GCC states who will ultimately offer tepid support for a potential internationally backed nuclear deal, it is Iran’s regional behavior, and not just its number of centrifuges, that worries them most.

Nowhere more than Syria is this concern about Iran’s role as explicit and magnified in a conflict that is tearing apart the center of gravity of near east. It is the Syrian crisis that sunk Obama’s credibility with the GCC in 2013 when he backtracked from the infamous chemical weapons redline. It is also Damascus (not Baghdad) that is seen as Iran’s linchpin to the Arab world and to its juggernaut proxy Hezbollah. Politically, Syria and the Assad regime embraced and co-sponsored Hezbollah’s rise since 1979, and militarily the Syrian corridor is critical for the party to maintain the buildup of its missile stockpile (estimated by U.S. at 70,000).

More broadly, the Syrian war and the failure of the international community to stop the bloodletting for the last four years has left a sense of bitterness and disappointment in the Arab and Sunni streets. The GCC is no longer willing to stand by as the death toll climbs to 250, 000, and the number of displaced skyrocketed over 10 million. While the rise of ISIS and jihadists is alarming for the West, the expansion of Hezbollah into the Syrian-Israeli border is starting to change the narrative in Israel as well.

Safe zones vs. day after

Finding some common ground on an action plan in Syria is something that the GCC leaders are hoping to achieve as they convene with Obama at the White House and Camp David. The U.S. administration is cognizant of this and has requested according to diplomatic sources a “clear plan on the way forward and the day after Assad in Syria”. In a timely announcement one week before the summit, the GCC invited the Syrian opposition for a conference in Riyadh “to map out” the post-Assad period.

Washington, according to same sources, wants the GCC leaders to present a clear vision on the military and political planning in Syria after Assad, which addresses the status of minorities, counterterrorism, and preserving an already diminished state infrastructure. The White House is “open” to an action plan if it is presented one, but is insisting on a political framework to avert another Iraq scenario following U.S. invasion in 2003. Toward that end, Syrian opposition figures insist that these plans exist and a post-Assad roadmap is in place. For them, however, getting to an orderly transition starts by planning the “day before ahead of the day after.”

Supporting a plan to establish Safe Zones in Syria is what key GCC players, Turkey, and the Syrian opposition are trying to sell to Washington. Turkish Foreign Minister Melvut Cavusoglu, in his meetings with the Obama administration two weeks ago, raised the potential of an “air cover” that the U.S. would provide to its trained and equipped rebels once they are deployed in Syria. SNC President Khaled Khoja told Al-Hayat during his visit this week to Washington that “there are positive U.S. indications to allow anti-aircraft weapons to reach the rebels”. The Obama administration has vetoed such deliveries in the last four years.

Establishing safe zones that would protect recent opposition gains in northern and southern Syria and have the potential to absorb the refugee influx is a plan that key regional powers would like to see materialize. They see such action as a stepping stool for a real turning point in the war of attrition between the rebels and Assad. On the one hand it could offer the space to build the rebels’ capability and local governance, while protecting civilians by ideally shielding the regime’s air force and barrel bombs.

Khoja told Al-Hayat that such plan would be managed by regional countries intercepting and jamming Assad air force, and establishing a “de facto” safe zone. It would not involve destroying Assad’s defenses. Providing anti-aircraft weapons is a key component to protect those areas, by more than 3000 military defectors with relevant experience said Khoja. While U.S. logistical support is not a priority for funding and operating the safe zones, Washington’s consent is.

For its part the Obama administration could use an already changing dynamic in Syria with rebel advances, as a trade off for garnering Arab support behind a potential Iran nuclear deal. It wouldn’t be the first time that such political bargains were struck. The Madrid peace conference in 1991 was in response to Arab support for the Gulf war, and the George W. Bush roadmap for peace between Israelis and the Palestinians followed the Iraq war.

If Obama approves such regional action in Syria, next week’s summit could be a game changer for his administration’s relations with the Gulf states. If, however, the U.S. policy of “kicking the can down the road” continues on Syria, the alternative is 19 months of strained relations between a more withdrawn Obama and a more defiant GCC.

This article was first published by al-Arabya

A Syria for Iran bargain at the U.S.-GCC summit?