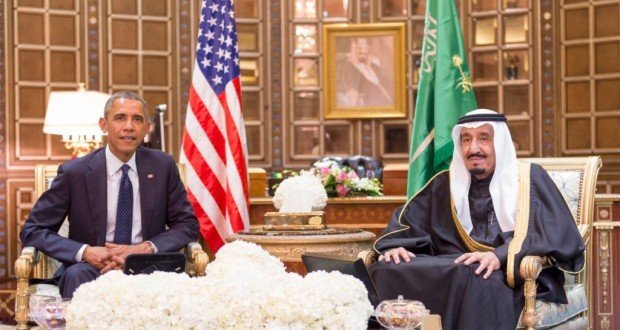 May 12, 2015 10:20 am 0
Give Diane Foley Biden’s Seat
On regime change in Syria, the White House capitulates to Russia
GOP giving Obama a free pass

The promise of a successful nuclear deal with Iran is that it will stop nuclear proliferation, moderate Tehran’s behavior, make the Middle East a safer place, and perhaps allow the U.S. to play a less active role in a troublesome region. Try telling that to the Arab leaders who were supposed to visit the White House and Camp David this week, but are now finding a reason not to show up.

President Obama announced the visit when he unveiled the Iran “framework” last month. The goal is to reassure the king of Saudi Arabia—along with the emirs and princes of Kuwait, Qatar, Bahrain, Oman and the United Arab Emirates—that the U.S. will continue to support them despite the nuclear deal with Iran. The President has also suggested he’ll have a “tough conversation” about their internal politics, though how another Obama lecture on good governance will ease concerns about U.S. reliability is anyone’s guess.

But at the last minute the senior Arab leaders are finding excuses not to make the trip. New Saudi King Salman pulled out on the weekend only days after confirming his attendance, and he will send lower-level officials instead. Bahrain’s king has also bowed out. These rejections can only be described as political snubs rooted in distrust of President Obama and his diplomacy.

The White House will now have to scramble to rescue its policy, and one thing we can expect is a new round of arms sales to the Gulf. The region is already awash in new weapons, including a recent announcement that Qatar will purchase $7 billion in French fighter jets. The signature U.S. contribution will probably be the Terminal High Altitude Area Defense System (Thaad), which can shoot down Scuds and other ballistic missiles fielded by Iran.

There’s nothing inherently destabilizing about arms sales. But the pace of Arab purchases, up 50% in the last year alone to $18 billion, along with the types of weapons they are buying, says something about their assessment of the threat they face. Why buy the multibillion Thaad system if diplomacy neutralizes the Iranian nuclear threat? What’s the sense of fielding brand new air squadrons if they are confident in traditional U.S. defense guarantees?

Mr. Obama also hopes to dissuade the Arab states, particularly the Saudis, from seeking their own nuclear weapons. One idea is to extend U.S. defense guarantees, perhaps including the U.S. nuclear umbrella, to the Gulf.

Such guarantees would put the U.S. on the hook for the defense of regimes such as Qatar, which sponsors Hamas and has links to the jihadist Nusrah Front in Syria. Mr. Obama may find such a commitment expedient for his Iran diplomacy, but if so he should explain this to the American people. Americans understand that Article 5 of the NATO treaty obliges the U.S. to defend Poland. But Mr. Obama should be honest if one price of his deal with Tehran is that Americans are committing to defend Dubai with a nuclear exchange.

Arab leaders have already shown how little trust they put in Mr. Obama’s assurances. Saudi Arabia’s war against Yemen’s Houthis came after the Administration had made overtures to the Iranian-backed militia earlier in January. Last month King Salman cashiered his half-brother as Saudi crown prince and replaced him with his tough-minded nephew Muhammad bin Nayef, who believes in more vigorous Sunni Arab self-defense.

Then there’s the Saudis’ view of the Iran nuclear deal—and of the Administration’s disregard for their objections. (“A lot of hysteria,” according to Secretary of State John Kerry.)

“Our allies aren’t listening to us, and this is what is making us extremely nervous,” Prince Faisal bin Saud bin Abdulmohsen recently told the Journal. Prince Turki al Faisal, Riyadh’s former intelligence minister, was even more blunt, saying in March that the Kingdom “will want the same” nuclear technology Iran is granted in a deal. That would include a plutonium reactor and thousands of centrifuges enriching uranium. The Kingdom already has plans to build 16 nuclear reactors by 2030, claiming it needs them to power desalination plants.

Some kind of Saudi nuclear bomb seems inevitable if the Iran deal follows the “framework” outline. The deal would leave Iran with its nuclear facilities intact if under inspections, and thus as a nuclear threshold state. Even the threat of such a capacity will enhance Iran’s ability to leverage power in the region. The Sunni Arabs will want their own deterrent as a counterweight.

For America the acute irony of this week’s meeting is that it again reveals the failure of Mr. Obama’s efforts to detach from the Middle East. He justified his withdrawal from Iraq and staying out of Syria on similar grounds, only to see the U.S. abdication spawn new crises and draw us back in. Now his Iran diplomacy is forcing the U.S. to make even more security guarantees in the region.

As former Secretaries of State Henry Kissinger and George Shultz noted in these pages last month, “the Middle East will not stabilize itself, nor will a balance of power naturally assert itself out of Iranian-Sunni competition.”

For seven decades, every American President save Jimmy Carter has understood that the best way to conduct foreign policy is to leave no one guessing about whose side we’re on. Mr. Obama has pursued a different policy. His Arab guests can be forgiven if they nod at his guarantees and accept his weapons, while also concluding that in the end they are on their own.