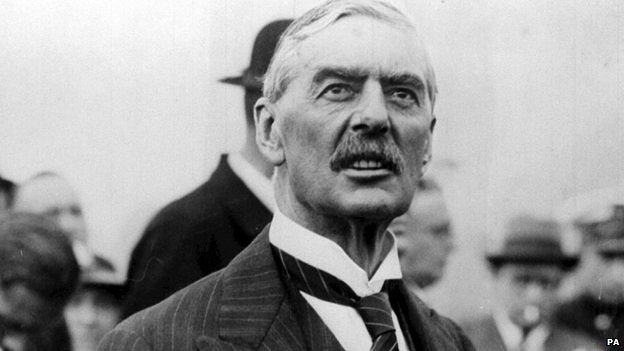 Members of the Obama administration have insisted that the Taliban are not terrorists. Those responsible for the recent Paris killings are not radical Islamists. The Muslim Brotherhood is largely secular. Jihad is a “legitimate tenet of Islam.” And “violent extremism,” “workplace violence” or “man-caused disaster” better describe radical Islamic terrorism. Domestic terrorism is just as likely caused by returning U.S. combat veterans, according to one report by a federal agency.

What is the point of such linguistic appeasement?

The word “appeasement” long ago became pejorative for giving in to bullies. One side was aggressive and undemocratic; the other consensual and eager to avoid trouble through supposedly reasonable concessions.

But appeasement usually weakened the democratic side and empowered the extremist one.

The architect of appeasement — for example, Neville Chamberlain, former prime minister of Great Britain — was predictably a narcissist. Chamberlain believed that his own powers of oratory, his insights into reason and his undeniably superior morality would sway even a thug like Adolf Hitler.

President Obama currently is convinced that his singular charisma and rare insight into human nature will convince the Taliban to peacefully participate in Afghan politics. Obama will supposedly also win over the Iranian theocracy and show it how nonproliferation is really to everyone’s advantage.

“Reset” diplomacy with Putin was supposed to lessen tensions — if, after the 2012 election, Putin just had more exposure to a flexible statesman of Obama’s wisdom.

Throughout history, without the vanity of the conceder, there would never have been appeasement.

Appeasement also always subordinates the interests of vulnerable third parties to the appeaser’s own inflated sense of self. When Chamberlain and the French Prime Minister Edouard Daladier signed the 1938 Munich Pact, they worried little about the fate of millions of Czechs who lost their country — and less about millions of Poles who were next in line for Hitler’s Blitzkrieg.

Reset diplomacy with Russia in 2009 was not much concerned about the ensuing danger to Crimeans or Ukrainians. When the Taliban takes over, hundreds of thousands of reformist Afghans will die.

Obama sees a deal with Iran as a way to cement his legacy as a breakthrough statesman. In comparison, the long-term consequences of a nuclear Iran on the security of tiny Israel or on the stability of the largely Sunni Arab Middle East are future and more abstract concerns for others.

Even major concessions never satisfy aggressive powers. It is a traditional Western liberal delusion — brought on by our wealth, leisure and the good life — that autocrats appreciate magnanimity rather than see it as timidity to be exploited further.

Hitler fumed that the compliant Chamberlain at Munich was a “worm” for making such concessions to him and boasted that he would stomp on that “silly old man” on the next occasion he saw him.

Releasing Guantanamo prisoners, or ignoring red lines to Syria, deadlines to Iran and step-over lines to Russia, did not win over aggressors. Gestures of appeasement and empty threats only emboldened terrorists and green-lighted dictators to ratchet up nuclear enrichment, or violence against their own people — or to go into Ukraine.

When a top Russian general brags that its nuclear force is now more powerful than America’s, or when Raul Castro warns that Cuba now expects an early return of the U.S. base at Guantanamo Bay as the price of normalization, past American concessions seem to have whetted their appetites for more confrontations.

The euphemisms for radical Islamic terrorism have not curbed it. They have not improved U.S. popularity in the Middle East.

The appeasing party is not always the weaker one. In 1938, Combined British and French military power was greater than that of the Third Reich. President Jimmy Carter had far more military options than did the Ayatollah Khomeini’s Iran during the 1979-80 hostage crisis.

Instead, stronger democratic nations feel that they can continue to enjoy short-term calm and peace of mind — and let others worry about any long-term likelihood of aggression. Maybe by treating jihad, terrorism and radical Islam as taboo words, radical Muslim terrorists will respond and become less threatening.

In truth, appeasement, not deterrence, is the more reckless path. With serial concessions, democratic leaders convince aggressors that they must be stronger than they actually are. Those fantasies increase the likelihood that weaker dictators and terrorists will miscalculate and set off a deadly confrontation down the road.

Yet the public often prefers appeasement. Military preparedness and investment are too costly. Backing up threats seems too scary. Churchills and Reagans sound shrill. Alliances, deterrence and balance of power sound so old-fashioned. Evil and good are derided as too simplistic. Defusing a crisis now is preferable to ensuring one down the road.

Appeasement continues not because it works, but because it serves the pretensions of narcissists.

Victor Davis Hanson is a classicist and historian at the Hoover Institution, Stanford University. His latest book is The Savior Generals from BloomsburyBooks. You can reach him by e-mailing [email protected].

More Time Assad is Accorded, Better Planning by the Islamists
To fix foreign policy mistakes, President Obama must first admit them
Where Do We Go From Here on Syria?
Slippery Barack Obama 976 Western Appeasement 483