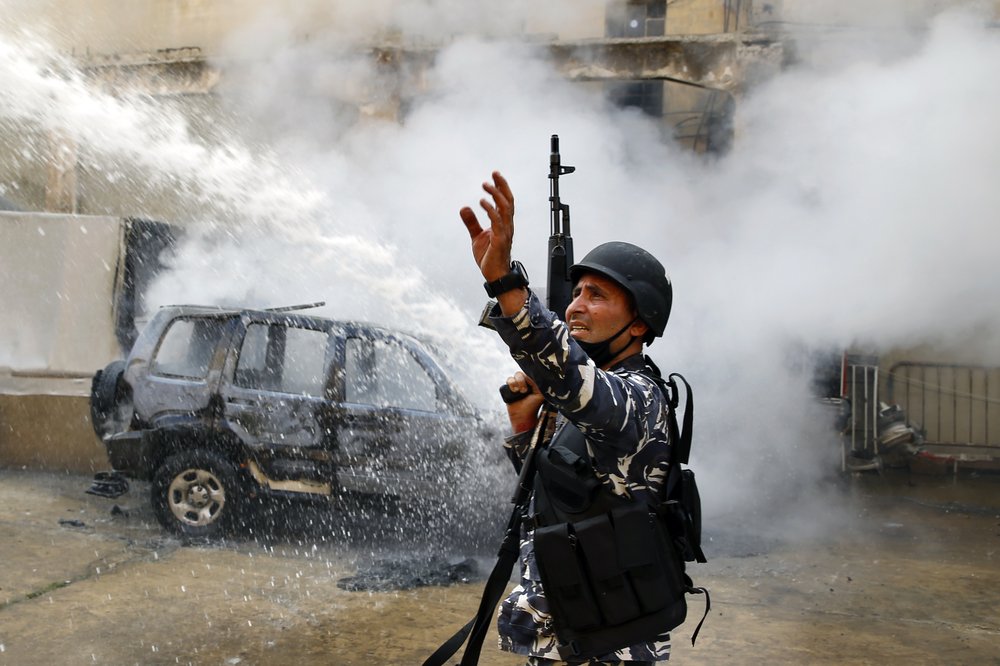 Imagine a controlled demolition of a structure using dynamite. The sight is meticulous, systematic, and uninterrupted. Now take that imagery and apply it to one of the most beautiful Mediterranean countries. Lebanon is collapsing in slow motion as a result of two combined effects: Hezbollah intentional mismanagement and the coronavirus that accelerated Hezbollah’s plans for Lebanon. At the end of the day, a weak Lebanon plays into Iranian hands.

Corruption in the Middle East is like a Black Hole. Its gravitas is powerful because every Arab who rises to power knows that wealth charts destinies. Money is what keeps Arab rulers and politicians in play once they land their coveted positions. Lebanon, the country with 160% debt to GDP ratio, is collapsing because of the corruption Hezbollah has facilitated to weaken it with help from greedy politicians.

Most Lebanese don’t understood that a weak Lebanon is to Iran’s advantage. How else can Iran stretch its new footprint of terror from Tehran to Beirut with total control? Hezbollah exists for one reason. To facilitate that control for Iran by facilitating and appointing the right greedy politicians in the right places to pilfer the state. PM Rafik Hariri was not corrupt, and this is why Hezbollah killed him. He stood in their way. The economy’s collapse of Lebanon that the world is witnessing is the ticking bomb the terror group planted long ago.

Topping the list of corrupt politicians is none other than Michel Aoun. He has amassed a fortune in the last few years money that belongs tom the Lebanese people.

Hunger wins over fear, every time

Hundreds of protesters in Lebanon’s northern city of Tripoli clashed with troops until late Tuesday night leaving several injured on both sides in some of the most serious riots triggered by an economic crisis spiraling out of control amid a weeks-long virus lockdown.

If the situation does not improve, hundreds of rioters will turn into tens of thousands. Folks, when people go hungry, it’s Bastille Day. Any day for any country. Hunger wins over fear, every time.

Iran wants a weak Lebanon but not one rioting against Hezbollah. The terror group accomplished its goal by using greedy Lebanese politicians who helped themselves to every penny floating.

Men with turbans, in the Muslim world, are under-achieving, power-hungry bastards. They are good at one thing: How to con their way into the hearts of the people as the true representatives of their maker. In other words, they are hustlers and flimflammers. Take a good look at the picture of Hezbollah chief Hassan Nasrallah. Would you marry your daughter to this bunco?

The role of these men is to destroy. The more chaos and destruction the more they gain power. In Hezbollah’s case, it is using that power to turn Lebanon into an easy meal for Iran. Just as the destruction of Syria became an opportunity for Khamenei to plant his claws into Syria’s flesh through occupation and ethnic cleaning, so will Lebanon yield fully to Iran when wrecked by chaos and anarchy.

A stable and a strong Lebanon is not to Hezbollah’s advantage. A weak Lebanon is a sheep heading for slaughter. From the look of things today, Iran is poised to steer the whole country into a proxy state bidding for its own interests. This means more violence, more economic fallout, and more death and destruction.

At this point, only a new civil war could really save Lebanon from Hezbollah and Iran.