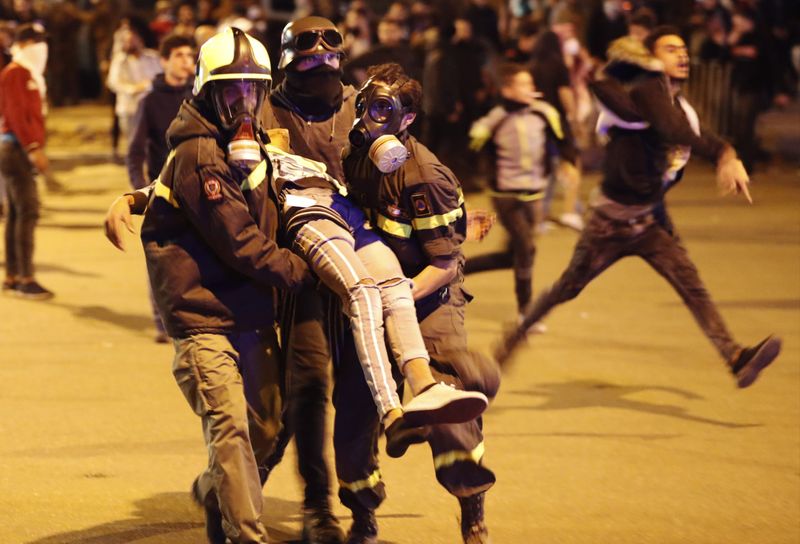 Barbaric Hezbollah is Turning Lebanon into a Mini Iran

January 16, 2020 4:29 pm 0
United States Has a Time Advantage Over Rogue Countries
Time to Assassinate the Leadership of Iranian Proxies
To Truly Weaken Iran the United States Must Assassinate Assad

An upsurge of violence in Lebanon’s protests against the ruling elite, with police meting out beatings and protesters hurling stones, has alarmed rights groups and whipped up public fury. Barbaric Hezbollah is turning Lebanon into a mini Iran.

After a brief lull in largely peaceful protests since October, people filled the streets again this week, angry at a political class that has steered Lebanon into its worst economic crisis since a 1975-1990 civil war.

Cynthia Sleiman, a charity worker and protester who ended up in hospital after Wednesday night’s violence in Beirut, said:

These past two nights, they (police) were really barbaric.

Hezbollah controls Lebanon by proxy to Iran. To include its security forces and considerable infiltration of the Lebanese Armed Forces.

I had just arrived and was looking for my friends when the policeman grabbed me, hitting me on the head and neck. I fell to the ground and blood was streaming out.

Lebanon’s Internal Security Forces (ISF) said they were pursuing rioters. It claimed the rioters injured 100 policemen this week. The ISF answers to the Minister of Interior Ray al-Hassan. A woman in a male-dominated environment some politicians want to see her fail.

A security source said they injured 80 protesters in two days and 72 others they arrested. Many of those in detention would be released on Thursday, the source said.

Since the protests led Prime Minister Saad al-Hariri to resign in October, politicians have failed to agree a new cabinet or rescue plan for the heavily-indebted economy. The Lebanese pound has lost nearly half its value. Dollar shortages have driven up prices and confidence in banks has collapsed.

Azza al-Masri, a media researcher also injured on Wednesday, said she saw a woman faint after police beat her up.

The viciousness was unlike anything I’ve seen.

Human Rights Watch’s Beirut director Lama Fakih told Reuters the group was concerned at excessive force by security forces amid rising frustrations on both sides. She said there was no “strong message” from government that it plans to hold the police responsible.

A Lebanese media group said the ISF attacked 15 journalists on Wednesday. One of them was a Reuters video journalist, who was treated in hospital for head injuries and released.

On Thursday, lawyers, journalists and activists gathered at the interior ministry and the justice palace in Beirut to complain about police violence. Interior Minister Raya al-Hassan told reporters she had not ordered a clampdown and denounced attacks on media.

Barbaric Hezbollah is Turning Lebanon into a Mini Iran