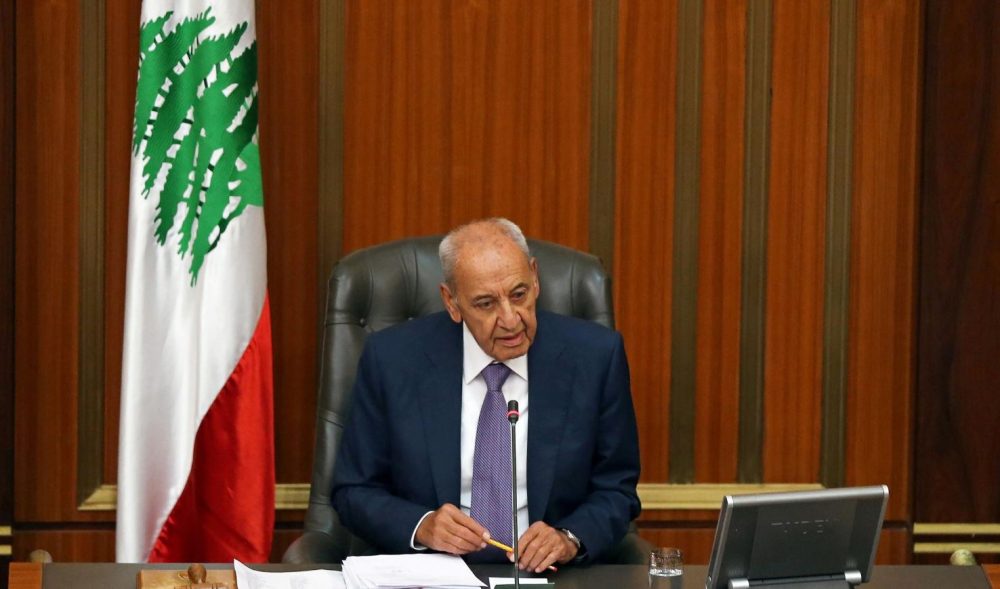 Most Corrupt Man in Lebanon Says Country is a Sinking Ship

November 18, 2019 6:50 am 0
Terrorist Khamenei Losing His Grip Over Iraq
How Hezbollah is Deliberately Harming Lebanon
The Evil of Hezbollah Knows No Boundaries

The most corrupt man in Lebanon, speaker of the Parliament Nabih Berri, compared Lebanon to a sinking ship that will go under unless someone takes action. Berri is one of the men the protesters want of power. The speaker has been a fixture in Lebanese politics since 1984, and his support for the Assad terror in Damascus has landed him the most lucrative jobs and access.

Berri is a multi-millionaire the sources of which are mysterious.

The speaker is feeling the pressure swirling around him that many Lebanese hope it will end his notorious career.

Berri who is an ally of Hezbollah told visitors that efforts to form a new government were “completely frozen”. The powerful Shiite group refuses to deconstruct a corrupt government they engineered and which sparked the protests in Lebanon.

Struggling with a massive public debt and economic stagnation, Lebanon has sunk into major political trouble since protests erupted against its ruling elite a month ago, leading Prime Minister Saad al-Hariri to quit on Oct. 29.

On Sunday, banks, which have mostly been closed since the protests began, announced temporary measures including a weekly cap of $1,000 on cash withdrawals. The banks also restricted transfers abroad to cover urgent personal spending only.

A bank staff union will decide by Monday whether to lift a strike that has kept the banks shut.

Efforts to form a new government, needed to enact urgent reforms, hit a setback at the weekend. It happened when former finance minister Mohammad Safadi withdrew his candidacy for the post of prime minister, sparking bitter recriminations.

Some protesters had rejected the potential nomination of Safadi, a prominent businessman and former lawmaker from the predominantly Sunni city of Tripoli, saying he is part of a political elite they want ousted.

“political understandings” would take place between “the parties and even with leaders of the protest movement” to form a new government.

It did not provide further details. “Political understanding” is code for Quid Pro Quo the Hezbollah corrupt way.

Hezbollah is feeling the pressure from Iran mount. Deputy leader Sheikh Naim Kassem, in an interview with Iranian media broadcast, said the new government’s agenda would help to calm down the streets.

Both Hezbollah and Berri want Hariri to be prime minister again. The United States has classified Hezbollah as a terrorist group.

The paper quoted him as saying:

The country is like a ship that is sinking little by little. If we don’t take the necessary steps, it will sink entirely.

Berri failed to mention that Lebanon is sinking under his stewardship and that of Hezbollah’s.

An-Nahar newspaper quoted Berri, the most corrupt man in Lebanon, as likening the situation of the Lebanese people to that of passengers on the Titanic. The passenger liner sank in 1912 after hitting an iceberg.

Most of the Lebanese protesters think he is one of the officers that rammed the ship into an iceberg.

Most Corrupt Man in Lebanon Says Country is a Sinking Ship