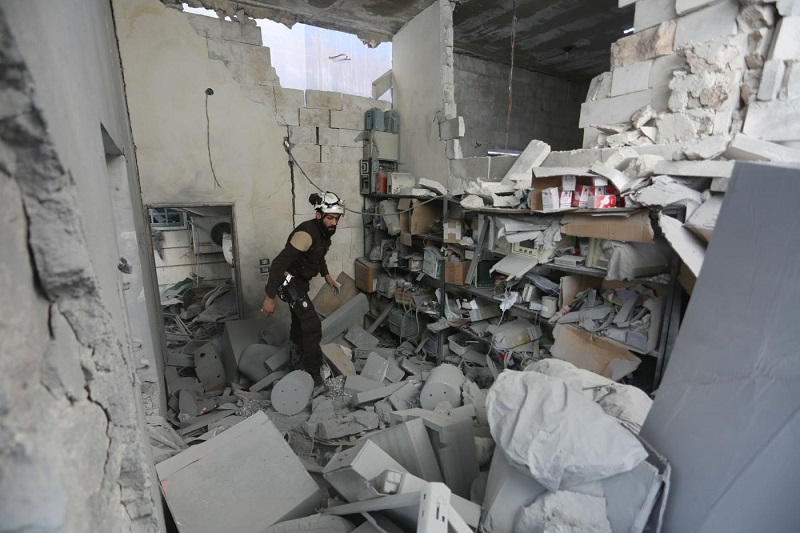 Coronavirus Sneaked Into Syria While Assad Was Bombing Hospitals

It is not hard to draw a line chart showing the first cases of the coronavirus rearing into the region in mid-February and Assad bombing hospitals in Idlib with the intent of killing innocent women and children. The two mirroring lines tell a story about the priority of the psychopath occupying Damascus today. The coronavirus sneaked into Syria while Assad was bombing hospitals, the very same ones needed to quarantine the sick after Iran exported it to Syria through Mahan Air, which remains operable between Tehran and Damascus.

SYRIA WILL SOON HAVE AN UNMANAGEABLE NUMBER OF INFECTIONS

Assad late response to the virus high infection potential is going to have devastating impact on the country, and its teetering economy. Just look what is going on in Iran to get a sense of where Syria is heading. Simultaneously, Syrians are at the mercy of a violent dictator and an unstoppable disease for the distant future.

The whole country is slowly closing down, and today the regime announced a 6:00pm to 6:00am curfew to limit the damage. No one, to this day, knows how many people have really been infected. And how many have died as a result of neglect and Assad obsession at waging wars. We will probably never know unless a whistle blower emerges with facts and data to tell the truth.

Syrians are “acutely vulnerable to COVID-19,” Geir Pedersen, the U.N. special envoy for Syria, said in a statement, and he appealed on humanitarian grounds for “large-scale releases of detainees and abductees.”

While the world suffers from a debilitating disease, we believe Assad is looking for ways to attack Idlib hospitals again. In fact, Assad wants to see the virus kill as many Syrians in Idlib as possible. It sure suits his ethnic cleansing scheme.

HAS THE VIRUS INFECTED THE RUSSIANS FIGHTING IN SYRIA?

A surprise visit by the Russian Defense Minister, Sergey Shoygu, to Damascus has reverberated all the way to Langley. We believe the real reason for Shoygu’s trip is to put an end to Iranians fighting alongside his troops in Syria. We believe many Russians personnel have been infected. To the point of rendering them incapacitated for the next two weeks.

Did any Russians die as a result? Probably not. But the infection spreads successfully in human clusters, which is the very essence of army life. There is almost a zero chance Iranian troops have not infected both Syrian and Russian troops. As well as Hezbollah doing its part, which imported the virus directly from Iran into Lebanon.

The regime announced four new cases today. On top of the singular case they claimed they had. Iran has over 27,000 cases, and Syria has 5. When tens of thousands of Iranians have occupied Damascus, and the military bridge between the two countries operates normally.

Coronavirus Sneaked Into Syria While Assad Was Bombing Hospitals