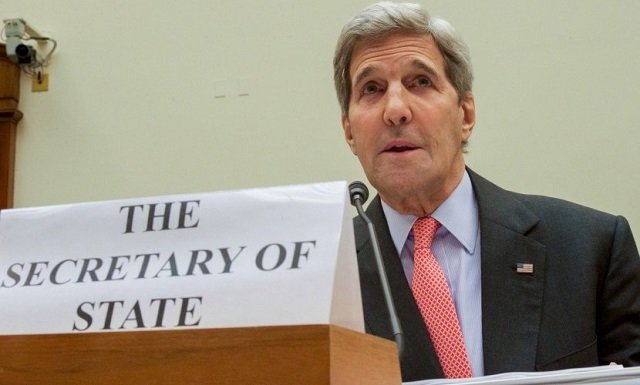 July 31, 2015 7:20 am 0
The People That Love or Hate Barack Obama
Jimmy Carter ushering Khomeini started all the terror
Is Putin extorting Obama?

TFS Note: What if Iran does not behave? Has anyone at the WH calculated the costs/benefits analysis of this scenario? Because if they did, they would surely not take this gargantuan risk for so little benefits.

Source: Mosaic – by Michael Doran (Who Bamboozled Whom?)

The nuclear deal with Iran is a wildly lopsided agreement.  Whereas Iran received permanent concessions, the United States and its partners managed only to buy a little time. The agreement will delay the advent of a nuclear-capable Iran for about a decade—and much less than that should Tehran decide to cheat. Meanwhile, thanks to the deal, Iranian influence in the Middle East is set to grow. All of these benefits accrue to Iran without its ever having given any guarantee that it will change its revolutionary, expansionist, and brutal ways.

Why did the Obama administration accept such a deal? In trying to answer this question, some critics have claimed that the president and his negotiator, Secretary of State John Kerry, were simply no match for their opponents. The Iranians, so the argument goes, are master negotiators—they play chess while the Americans play checkers.  “You guys have been bamboozled and the American people are going to pay for that,” Senator Jim Risch of Idaho told Kerry during recent hearings on the nuclear deal.

One sympathizes with the senator’s frustration, but his criticism is misplaced. The Iranians are not nearly so talented as claimed. While Foreign Minister Javad Zarif did exhibit skill in the negotiations, he also resorted to blatantly underhanded tactics that, opposite a different American team, would have rebounded against him. Zarif made concessions one day, only to revoke them the next; raised new issues at the eleventh hour; and blurred the lines of authority between himself and the Islamic Republic’s supreme leader, Ayatollah Khamenei, to the point where Kerry never knew for certain whether a deal could actually be cut.

These were the tactics of a used-car salesman, not a master statesman. If the White House had been so inclined, it could have invoked them as justifying a redoubling of the pressure on Iran. But the president and the secretary of state consciously rejected that path—and not for the first time.

In November 2013, the administration agreed to an interim deal that both granted Iran the right to enrich and accepted the idea that all restrictions on the Iranian program would be of limited duration. In so doing, the interim deal already incorporated the main lines of the comprehensive agreement that we see before us today. And long before November 2013—indeed, from the very beginning of his presidency—Obama has consistently dangled before the Iranians the prospect of gaining what they have most wanted: to become, in his words, “a successful regional power.” Toward that end, as he has stipulated on more than one occasion, the message he has sent to Tehran is that it would have more to gain by working with us than by defying us.

This is what many of Obama’s critics, including in Congress, have yet to absorb. When they suggest that the White House has been taken in, they tacitly assume that the president shares their goal of containing and rolling back Iran—an enemy power bent on ousting the United States from the Middle East and vanquishing America’s allies, Israel and Saudi Arabia foremost among them—but has somehow become confused about how best to achieve this. But he does not see Iran that way at all.

In his news conference after the signing of the comprehensive agreement, Obama emphasized that the deal only “solves one particular problem”—that is, the nuclear issue. But he also expressed the hope that it would also “incentivize” the Iranians “to be less aggressive, less hostile, more cooperative.” This gets to the heart of his approach, adumbrated again and again in his own statements and in those of his key advisers. Here is the president in a January 2014 interview in theNew Yorker:

If we were able to get Iran to operate in a responsible fashion—not funding terrorist organizations, not trying to stir up sectarian discontent in other countries, and not developing a nuclear weapon—you could see an equilibrium developing between Sunni, or predominantly Sunni, Gulf states and Iran.

And here more recently is Ben Rhodes, the deputy national-security adviser for strategic communication: “We believe that a world in which there is a deal with Iran is much more likely to produce an evolution in Iranian behavior.”

In Obama’s eyes, containment is a fool’s errand, and continuing to treat Iran as a pariah will simply ensure that it will never help us damp down Middle Eastern turmoil. To him, therefore, the nuclear deal is not an end in itself; it is a means to the larger end of a strategic partnership that will conduce to his sought-for “equilibrium” in the Middle East. It is only because of the president’s awareness that the very idea of such a strategic partnership is anathema to a majority of the members of Congress, as it is to America’s allies in the Middle East, that he has pretended otherwise, framing the deal as a narrowly conceived and heavily qualified arms-control agreement that will in any case not affect America’s interest in countering Iranian mischief.

Of course, the agreement is no such thing, and Congress is right to be treating it with the utmost gravity. Much of the debate centers on technical questions—on whether the inspection regime is tight enough, the snap-back mechanism reliable enough, and the enrichment quotas restrictive enough. In addition to these far-from-trivial issues, critics also point to the havoc in increased Iranian aggressiveness that the deal promises to bring to the Middle East and elsewhere. By immediately channeling upward of $150 billion to Iranian coffers, it will inevitably contribute to funding the regime’s terror network. (Significantly, a cessation of Iran’s support for terror was not a condition of sanctions relief.) And as economic ties with Europe and Asia expand, and new avenues of diplomatic and military cooperation open up with Russia and China, Iran will become ever more confident and bellicose.

The White House has replied to the latter concerns by claiming that the regime will spend its windfall on butter, not guns. “They’re not going to be able to suddenly access all the funding that has been frozen all these years,” President Obama asserted in April—and besides, he added, “a lot of that [money] would have to be devoted to improving the lives of the people inside of Iran.”

Even to some advocates of the deal, the absurdity of this argument—when in the course of human history has getting $150 billion at the stroke of a pen ever convinced anyone to change his ways?—is too patent to be ignored. Thus, Nicholas Burns, a distinguished former diplomat and a staunch supporter of the nuclear agreement, has acknowledged its deficiency in this respect and has joined a growing chorus in proposing an antidote. “This is no time to help Iran augment its power in a violent and unstable region,” Burns has testified to Congress. “Instead, the U.S. should impose a containment strategy around Iran until it adopts a less assertive and destructive policy in the region.”

Unfortunately, Burns and others advancing this view are caught in the same contradiction as are Obama’s critics; inadvertently, both parties are reinforcing the fiction that Obama is truly interested in containing Iran. In fact, the White House has consistently displayed an aversion to countering Iran. Time and again, America’s allies in the Middle East have begged the president to help them curtail Iranian influence in Iraq, Syria, Lebanon, and Yemen, and time and again he has refused. His aspiration for equilibrium is instead based on the conviction that, thanks to his diplomacy, Iran will voluntarily come to place limits on its own ambitions. With that aspiration, the nuclear deal—an explicit recipe for strengthening all elements of Iranian power, political, military, and economic—is entirely compatible.

Indeed, even if Obama were to agree with the need for punitive measures to curb Iran’s “malign influence,” in the phrase of Secretary of Defense Ashton Carter, the deal will vastly complicate any such project. One of the text’s more remarkable passages reads: “Iran has stated that if sanctions are reinstated in whole or in part, Iran will treat that as grounds to cease performing its commitments under this [agreement].” With this statement the Iranians have warned America that any action designed to weaken Iran will be met with nuclear blackmail.

If the Iranian nuclear program has been a knife held at America’s neck, the deal has, temporarily, moved the knife away by at most a few centimeters. To achieve this paltry, equivocal, and evanescent benefit, the deal has permanently ceded diplomatic leverage to Iran and nullified vigorous containment as a serious option. Anyone who claims otherwise has certainly been bamboozled—but not by the Iranians.