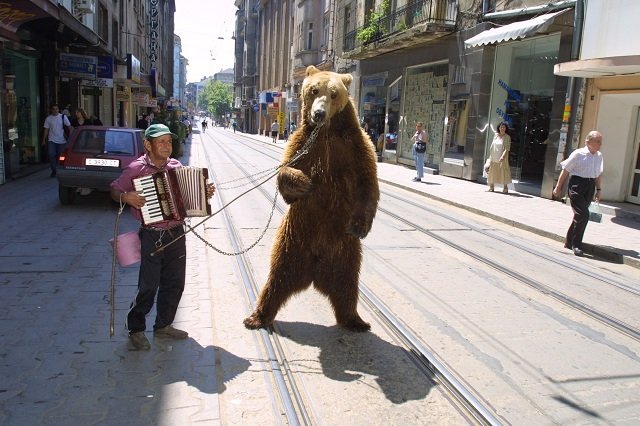 Watch For Your Feet When Dancing With a Russian Bear

Syrian opposition figures rejected on Wednesday a Russian draft proposal for a process aimed at solving the nearly five-year war, saying Moscow’s aim was to keep the psychopath Baschar al-Assad in power and marginalize dissenting voices.

When dancing with a Russian bear, watch for your feet as he attempts to crush them.

A draft document obtained by Reuters on Tuesday showed Moscow would like the Syrian government and opposition to agree on launching a constitutional reform process of up to 18 months, followed by early presidential elections.

Russia, which with Iran has been Assad’s top ally during the civil war, has denied any document is being prepared before international peace talks in Vienna this week

The text, obtained by Reuters, does not rule out Assad’s participation in early presidential elections, something his enemies say is impossible if there is to be peace.

“The Syrian people have never accepted the dictatorship of Assad and they will not accept that it is reintroduced or reformulated in another way. The Russians are now trying to play the game they have been playing since Geneva.”

Which part of “No more Assad” Putin does not get.

Hadi al-Bahra, a member of the coalition’s political committee, said the main problem was Assad and any political process needed to tackle this with assurances and guarantees.

He also dismissed the idea of holding elections under the current system. “How can the elections be fair when the citizens inside Syria are afraid of retaliation from the security services of the regime?” he said.

Coalition member Michel Kilo said Moscow’s real aim was to preserve Assad and his state apparatus by pushing for an unfair electoral process.

“We are not against elections, we are democrats. But it cannot be that we are forced to accept a president, who is a criminal, who destroyed the country – what logic is behind this idea?”

Watch for your feet when dancing with a Russian bear. He aims to crush them.

Kilo further said that if the Russians successfully pushed ahead with this idea at the next round of Vienna talks and managed to convince other countries, it would be a disaster.

Any plan for Syria must be agreed with the Syrian people and not be imposed by the outside, he said.

“There are hundreds, thousands of people that are armed in Syria and they want to resist the Russians and everyone if they do not give them their right as a people,” he said.

The United States, its Gulf allies and Turkey have also all said Assad must leave power for there to be peace.

Watch For Your Feet When Dancing With a Russian Bear