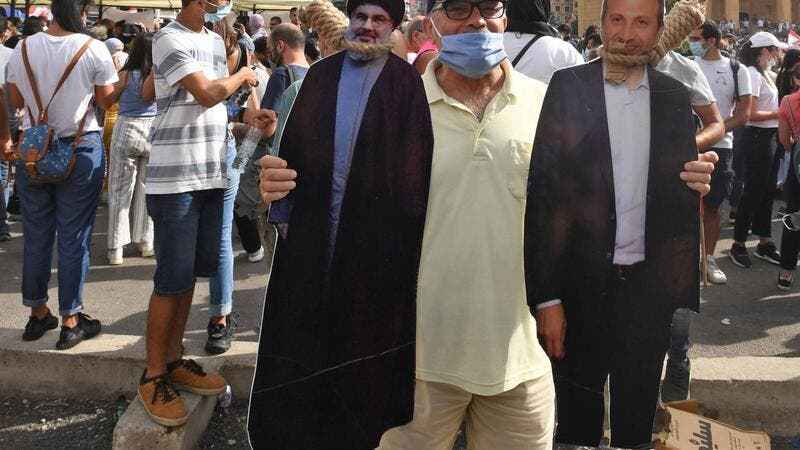 November 6, 2020 8:39 am 0
Terrorist Khamenei Losing His Grip Over Iraq
Countries That Benefit From the Demise of Hezbollah
Iranian Militant Proxies Fail to Govern Lebanon and Iraq

On Friday, the US Treasury imposed sanctions on Gibran Bassil, the leader of Lebanon’s biggest Christian political bloc and son-in-law of President Michel Aoun. Treasury accused him of corruption and ties to Hezbollah.
Bassil, a former foreign minister, heads the Free Patriotic Movement, which Michel Aoun founded.

If there is a polarizing figure in Lebanese politics who has facilitated Hezbollah’s terror and corruption, it is Michel Aoun’s son-in-law Gibran Bassil. The justification for sanctioning Bassil is right on target. In fact, it’s few years late. The United States should have sanctioned him four years ago. Bassil is a real useful idiot par excellence.

The New Arab website published an article it entitled “Why Gibran Bassil is the Most Reviled Politician in Lebanon“, in which Dalal al-Bizri wrote:

His [Gibran Bassil] authority is dependent on both Hezbollah and his father-in-law – the president allied to Hezbollah. He twice lost in the general elections as a candidate for Batroun, his home town, even though the law was manipulated to suit him. He was supported and rewarded by Hezbollah more than any other politician.

In recent months, the United States has also placed sanctions on several officials linked to Hezbollah, an agent of Iranian terror. Hezbollah has become Lebanon’s most powerful political force, and which Washington considers a terrorist group.

BASSIL AT THE FOREFRONT OF CORRUPTION IN LEBANON

The Treasury Department said Bassil was at the “forefront of corruption in Lebanon”.

The systemic corruption in Lebanon’s political system exemplified by Bassil has helped to erode the foundation of an effective government that serves the Lebanese people.

A senior U.S. official said Bassil’s support for Hezbollah was “every bit of the motivation” for targeting him for sanctions.

The United States sanctioned Bassil under the Global Magnitsky Human Rights Accountability Act. The Act targets human rights abuses and corruption around the world. It calls for a freeze on any U.S. assets and prohibits Americans from doing business with Bassil.

The State Department also imposed a ban on Bassil’s travel to the United States. U.S. officials did not rule out further sanctions on Bassil or others in Lebanon.

A senior U.S. official said the sanctions announcement was “not intended to impact a government formation process” in Lebanon. The official also denied any connection between the announcement and this week’s U.S. elections. Usually, such sanctions packages take months to prepare.