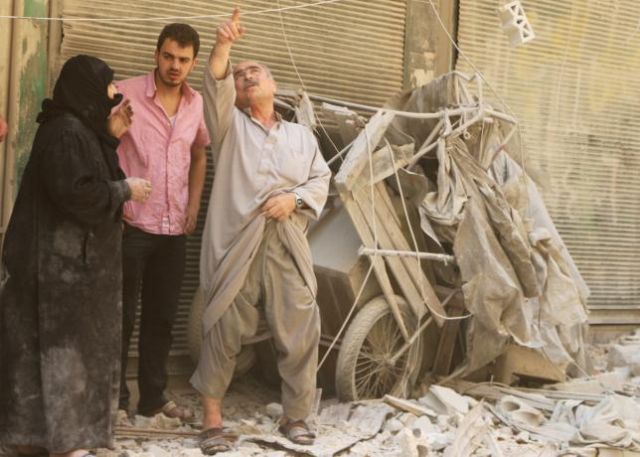 The sound of whirring helicopter blades fills Syrians with fear that “hell and fire” is about fall in a barrel bomb, a rescue worker told the United Nations Security Council on Friday as pressure mounts for the body to take action to stop civilian killings in Syria.

These barrel bombs Putin refuses to stop are the root cause behind the attacks in France, Kuwait, and Tunisia last Friday. The fact Reuters is writing about it, and the U.N. is interested in this subject is because they see a correlation between barrel bombs and ISIS terror.

“This sound means watching for death,” said Raed Saleh, head of the Syrian Civil Defence, an organization of rescue workers known as white helmets who rush to the site of bomb and mortar attacks to dig through rubble for survivors.

In the past week U.N. chief Ban Ki-moon, 71 U.N. states and some 80 aid and human rights groups have urged the Security Council to act on the killing of civilians. France and Spain organized Friday’s informal council meeting on barrel bombs.

Saleh said barrel bombs – steel drums of shrapnel and explosives – were the most lethal weapon. He told the Security Council that rescuers were camouflaging ambulances and fire engines to avoid being targeted.

“As a patriotic Syrian I would never have thought of myself asking one day for a foreign intervention,” Saleh said. “However, the souls of innocent women and children who die every day call us to ask for any intervention possible to put an end to the barbaric killing machine led by Bashar al-Assad.”

“They are dropped by helicopters and the only ones who have helicopters is the government,” de Mistura said.

In February last year, the Security Council demanded that the warring parties cease attacks against civilians, including the use of barrel bombs. It threatened to take further steps in the case of non-compliance.

But Russia, backed by China, has shielded its ally Syria from any threats of council action during the four-year war. Russian diplomat Andrey Listov told the council on Friday that any moves by the council should not “undermine attempts by the Syrian government to legitimately fight terrorism.”

The longer Obama ignores Assad’s barrel bombs, the more attacks by ISIS. ISIS does not terrorize Russia so he could care less if France is terrorized.

U.S. Ambassador to the United Nations Samantha Power said the words of the council were being mocked by the continued use of barrel bombs and that “governments that are supporting this regime are supporting this practice.” A reference to Vladimir Putin the thug behind backing the Assad atrocities in Syria.

A Syrian government crackdown on a pro-democracy movement in 2011 led to an armed uprising. Islamic State militants have used the chaos to declare a caliphate in Syria and Iraq.

The United Nations has said that some 220,000 people have been killed in Syria and 12.2 million people need help, including more than 5 million children. About 7.6 million are internally displaced and more than 4 million have fled Syria.