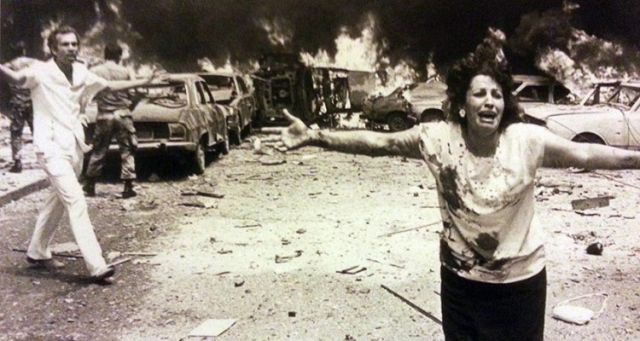 Repeating Lebanon in Syria is Backfiring on the West

June 27, 2015 9:34 am 0
The La-La Land Diplomacy of Obama
29 Hezbollah Fighters Killed in Battle for Arsal
‘Hezbollah Gangsters’ is an Industry in Lebanon

The West permitted the Lebanese civil war to fester for 17 years. But that war was more about the Lebanese protecting themselves from
the Assad regime forces and the Palestinians. So, it remained exclusively local in all its aspects.

Today, someone, somewhere believes they can repeat the Lebanese tragic experience in Syria by marginally interfering in the war, especially when it comes to the Assad terror. Their problem is they forgot Syria has quickly turned into a sectarian civil war thanks to Assad who targeted Sunni civilians.

Not to fully grasp the nuances of a sectarian war, the Obama national security staff doused it with gasoline by striking against Sunni
terror (i.e. ISIS) as it expanded into Iraq and formed an Islamic State but totally ignored the Shiite terror of Assad who continues to kill innocent Syrian women and children with his barrel bombs.

Repeating Lebanon is backfiring in Syria.

As if we have not learned anything from 9/11, the Sunni terrorists are coming back to kill Western citizens of any country involved in the
coalition to strike Sunni terror without also striking the Shiite terror of Assad and Iran. This time around, the Sunni terrorists are better equipped, better trained, are followed by millions of sympathizers (Read Face reality: Many Muslims support ISIS), have access to unlimited funds, and are 100 times more barbaric than al-Qaeda.

Repeating Lebanon by ignoring the Syrian civil war is backfiring big time. Why should France, which lobbied hard for Obama to take out the Assad regime before the extremists took control, be paying for his mistakes today?

The Sunni terrorists represented by ISIS struck American interests in France, British citizens in Tunisia, and innocent Shiites in Kuwait
the Sunni terrorists believe the whole Shiite sect is mired in killing innocent Sunni civilians in Syria just because Iran is terrorizing Syrians with the Assad barrel bombs.

Obama made two mistakes that led us here : He ignored the sectarian war when Assad started it, and he failed to stop the terror of Assad against civilians when he was more than eager to strike ISIS as quickly as possible.

Saudi Arabia and France begged Obama to establish a No-Fly Zone in Syria to protect Sunni civilians. He refused repeatedly aided by another ignorant JCS in General Martin Dempsey. The Arab street perception today is that America is siding with Shiite terror killing Sunni civilians.

The combination of Obama’s ignorance and stubbornness are leading us to terror expanding across continents. Obama believed repeating Lebanon will keep the war contained.

It has resulted, as well, in more Sunni sympathizers the world over for ISIS that Obama and his ignorant staff are unable to comprehend. The policies of Barack Obama in repeating Lebanon in Syria will have repercussions for another 20 years as terror spreads like locust.

This is what happens when the American people elect an inexperienced president who ignored the advice of so many in his cabinet, in the Senate, and from U.S allies to adjust his policies to show equal resolve towards Shiite terror as he has shown towards Sunni terror.

Repeating Lebanon in Syria is Backfiring on the West