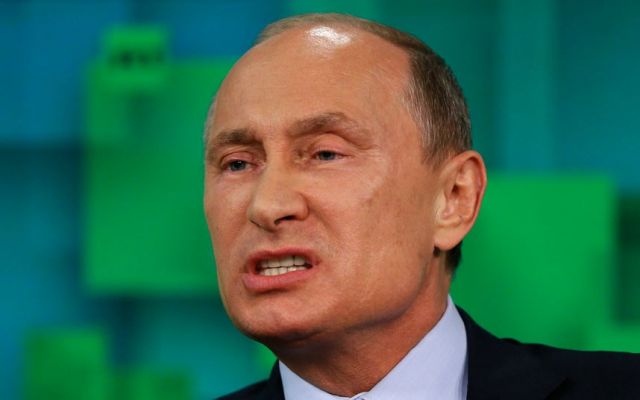 Assad released Islamists from his prison who formed ISIS. Obama ignored the Assad regime atrocities, which turned ISIS into a global threat. Putin with his U.N. vetoes in support of Assad is unleashing ISIS against the West. In fact, Putin’s ISIS is destroying the West slowly.

All of them are playing a role in feeding and empowering ISIS, so excuse us if we become skeptical of their public deceptions and smoking mirrors positions.

Just like on a chess board, the pieces are connected by their next moves or cards in a bridge game are connected by the tacit understanding of your partner, ISIS is connected to Russian revenge on the West. When Obama refuses to strike Assad, he is playing into Putin’s hands.

Do Valerie Jarrett’s hardcore communist roots have anything to do with Obama’s strategy? You bet your house they do.

Saudi Arabia and its GCC sisters, France, and Britain must confront the ISIS threat by diminishing considerably the Assad capacity to barrel bomb Sunni civilians. Those barrel bombs are feeding into the terror machine against the West with help from Putin’s ISIS.

If Obama is too dumb to act because he is beholden to Iran, then the Arab countries and the European nations must take out the Assad Air Force to halt those barrel bombs. They will diminish the power and capacity of ISIS to recruit.

Today, their Air Forces are participating in a U.S.-led coalition against ISIS while turning a blind eye to the Assad atrocities. It looks like Europe has sided with Shiite terror whose job is to kill Sunni civilians. Wonder no more why the Arab street sympathizes so much with ISIS.

Our initial reaction is to condemn the acts of terror perpetrated by ISIS against France, Tunisia, and Kuwait, which must not be minced. The U.N.’s 15-member Security Council issued a statement in which it stated:

“The members of the Security Council underlined the need to bring perpetrators of these reprehensible acts of terrorism to justice,”

The U.N. and its members would be fooling themselves if they believed bringing the perpetrators to justice would make ISIS go away.

Putin’s ISIS begins at the U.N. where Russia has vetoed any attempts at curbing the Assad violence against civilians. As Ambassador Power said, Assad must go before we defeat ISIS; yet, between Obama’s hardcore communist top aide and a fearful Europe, Putin’s ISIS wreaks havoc and no one is happier than Assad, Iran, and Russia.

Syria claims shooting down of US drone over Latakia
In 2015, Assad and ISIS Caused the Deaths of Over 55,000 People
Russian Airstrikes in Syria Seem to Be Hurting Civilians More Than ISIS
Slippery Barack Obama 976