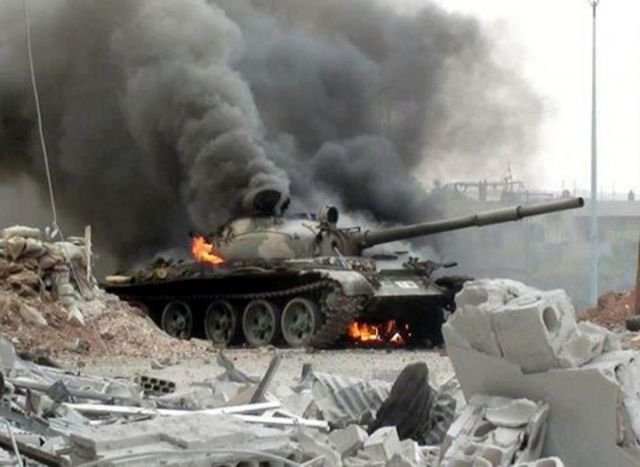 Syrian Rebels Capture a Major Army Base in Daraa

June 9, 2015 7:47 am 0
Syrian Moderates Escalate Attacks Against Assad in Daraa
Did you know Hezbollah was pregnant?
Syria After Four Years of Mayhem

Syrian rebels capture a major army base in the south of the country in Daraa, a defeat that would add to the pressure on Assad after other recent setbacks.

“We announce the liberation of Liwa 52,” said Issam al-Rayyes, spokesman for the “Southern Front” alliance of rebel groups. The base “Liwa 52”, or the 52nd Brigade, is near the city of Deraa near the border with Jordan.

Bashar al-Zoubi, leader of one of the Southern Front groups, also said the attack launched on Tuesday morning had resulted in the capture of the base.

Opening a southern front at a time when Iranian and Iraqi militias are concentrating their fighters in Idlib, north of the country, will increase the pressure on Iran to deploy more troops in the south where Damascus could be overrun if Assad loses his battles.

Syrian officials could not immediately be reached for comment.

Short video below showing the base burning from incessant pounding by rebel artillery.

Syria After Four Years of Mayhem
100 killed in week of clashes in south Syria
BREAKING NEWS: Results of the Referendum on the New Constitution
Syria News 1146 Syrian Revolution 1348