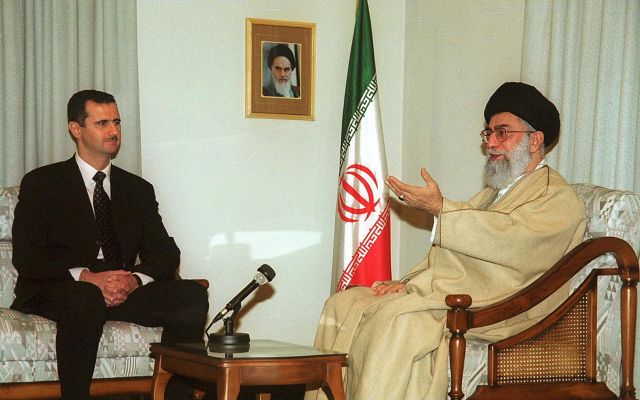 June 9, 2015 9:10 am 0
Is Obama wagging the dog?
UN urged to probe abuses by Syria’s Assad
One Step Closer to Prosecuting the Sneaky Bastards

Iran is spending billions of dollars a year to prop up the Syrian dictator Bashar al-Assad, according to the U.N.’s envoy to Syria and other outside experts. These estimates are far higher than what the Barack Obama administration, busy negotiating a nuclear deal with the Tehran government, has implied Iran spends on its policy to destabilize the Middle East.

On Monday, a spokeswoman for the U.N. special envoy for Syria, Staffan de Mistura, told me that the envoy estimates Iran spends $6 billion annually on Assad’s government. Other experts I spoke to put the number even higher. Nadim Shehadi, the director of the Fares Center for Eastern Mediterranean Studies at Tufts University, said his research shows that Iran spent between $14 and $15 billion in military and economic aid to the Damascus regime in 2012 and 2013, even though Iran’s banks and businesses were cut off from the international financial system.

Such figures undermine recent claims from Obama and his top officials suggesting that Iran spends a relative pittance to challenge U.S. interests and allies in the region. While the administration has never disclosed its own estimates on how much Iran spends to back Syria and other allies in the Middle East, Obama himself has played down the financial dimension of the regime’s support.

“The great danger that the region has faced from Iran is not because they have so much money. Their budget — their military budget is $15 billion compared to $150 billion for the Gulf States,” he said in an interview last week with Israel’s Channel 2.

But experts see it another way. The Christian Science Monitor last month reported that de Mastura told a think tank in Washington that Iran was spending three times its official military budget–$35 billion annually–to support Assad in Syria. When asked about that earlier event, Jessy Chahine, the spokeswoman for de Mistura, e-mailed me: “The Special Envoy has estimated Iran spends $6 billion annually on supporting the Assad regime in Syria. So it’s $6 billion not $35 billion.”

Either way, that figure is significant. Many members of Congress and close U.S. regional allies have raised concerns that Iran will see a windfall of cash as a condition of any nuclear deal it signs this summer. Obama himself has said there is at least $150 billion worth of Iranian money being held in overseas banks as part of the crippling sanctions. If Iran spends billions of its limited resources today to support its proxies in the Middle East, it would follow that it will spend even more once sanctions are lifted.

The Obama administration disagrees. It says the amount Iran spends on mischief in the region is so low that any future sanctions relief will not make a difference in its behavior. Speaking at a conference this weekend sponsored by the Jerusalem Post, Treasury Secretary Jack Lew said that even as Iran’s economy has suffered from sanctions in recent years, it has been able to maintain its “small” level of assistance to terrorists and other proxies. “The unfortunate truth remains that the cost of this support is sufficiently small, that we will need to remain vigilant with or without a nuclear deal to use our other tools to deter the funding of terror and regional destabilization,” he said.

Shehadi and other experts acknowledged that their figures were estimates, because the Tehran regime does not publicize budgets for its Revolutionary Guard Corps or the full subsidies it provides to allies. Nonetheless, Shehadi says, Iranian support to Syria today is substantial, especially when factoring in the line of credit, oil subsidies and other kinds of economic assistance Iran provides the Syrian regime.

Steven Heydemann, who was the vice president for applied research on conflict at the U.S. Institute of Peace until last month, told me earlier this year that the value of Iranian oil transfers, lines of credit, military personnel costs and subsidies for weapons for the Syrian government was likely between $3.5 and $4 billion annually. He said that did not factor in how much Iran spent on supporting Hezbollah and other militias fighting Assad’s opponents in Syria. Heydamann said he estimated the total support from Iran for Assad would be between $15 and $20 billion annually.

A Pentagon report released last week was quite clear about what Iran hopes to achieve with its spending: “Iran has not substantively changed its national security and military strategies over the past year. However, Tehran has adjusted its approach to achieve its enduring objectives, by increasing its diplomatic outreach and decreasing its bellicose rhetoric.” The report says Iran’s strategy is intended to preserve its Islamic system of governance, protect it from outside threats, attain economic prosperity and “establish Iran as the dominant regional power.”

If Iran ends up accepting a deal on its nuclear program, it will see an infusion of cash to pursue that regional agenda. Shehadi said this fits a pattern for dictatorships in the Middle East: they preoccupy the international community with proliferation issues while, behind the scene, they continue to commit atrocities.

“In the early 1990s, Saddam Hussein was massacring his people and we were worried about the weapons inspectors,” Shehadi said. “Bashar al-Assad did that too. He kept us busy with chemical weapons when he massacred his people. Iran is keeping us busy with a nuclear deal and we are giving them carte blanche in Syria and the region.”