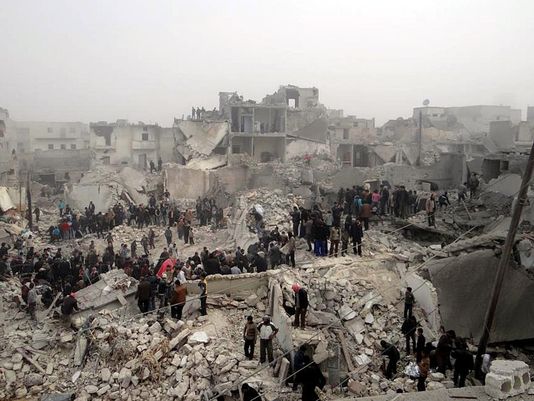 Barrel bombs, beheadings and the rise of ISIS: The Syrian civil war ranks as one of the world’s worst crises. It has left 220,000 dead, drawn in the U.S. and sparked a massive flood of refugees, including a few who have resettled in Louisville.

As the U.S. ambassador to Syria from 2010 to 2014, Robert Ford held a key position from the time the Arab Spring sparked demonstrations against President Bashar al-Assad’s regime to the civil war that led to Syria’s unraveling. Ford quit in 2014, saying he was unable to support the Obama administration’s policies.

On Tuesday night, Ford will speak about the Islamic State militant group and Syria at a sold-out event at the World Affairs Council of Kentucky and Southern Indiana. Ford, now a resident scholar at the Middle East Institute in Washington, D.C., spoke to The Courier-Journal recently ahead of his talk. The following is an edited Q & A from that interview.

Q: In 2014, you stepped down, saying you could not defend the Obama administration’s inconsistent support for Syrian rebels. Did America’s reluctance to arm moderate rebels contribute to the rise of ISIS?

Absolutely it did help ISIS. The moderates on the ground in Syria … they were telling us in early 2012 that there were extreme groups within the armed opposition that had money and were luring young Syrians to go fight for them instead of secular, more moderate groups. Because the extreme elements had money, food and ammunition, and the moderates said we can’t compete with these groups. And they said “help us.” By standing back and watching, we let al-Qaida suck in a whole lot of Syrians into their ranks. …

Q: How should the U.S. balance the competing demands to address brutal regimes or extremists and to stay out of drawn-out foreign conflicts?

We should always be very careful committing American forces. We should only commit our forces as a last resort. It’s always much better when you’re dealing with extremism to find indigenous forces to contain, confront and roll back extremism. I think that’s the way to go. If we just sit back and say, “Well, we’re going to let these people fight it out,” … a lot of time it’s the people on the (extreme side that) have more money and material. It’s much better to help the moderates with resources early on.

Q: In 2011, you highlighted American support for the Arab Spring by visiting opponents to Assad. At that time, some hoped protests could lead to reforms. Looking back, what did the U.S. not realize at that time?

We didn’t understand how completely ruthless the Syrian government would be in trying to hold on to power. I expected the country would fall into civil war, but I must admit I never thought the government would completely destroy cities like Aleppo in order to stay in power. I’ve never seen anything like it and I’ve worked in places with civil war like Algeria and Iraq. The second thing we didn’t understand … was that the extremists themselves would metastasize into something even worse than al-Qaida. And that is the Islamic State.

Q: What is the current status, or balance of power, among the Assad regime, moderate rebels and ISIS?

The regime is losing, which isn’t a surprise, because it’s a long war of attrition, and the regime’s support base is a minority. They’re taking a lot of casualties, and they’re running out of forces. They’ve lost entire provinces in the east and north, and they’re in retreat. They’re slowly having to give up ground. The Islamic State has lost ground to Syrian Kurds in the northeast of the country. We’re doing close air support, bombing runs. The Islamic State has captured territory in the central part of the county and the western part, close to some of the bigger cities. The more moderate rebels have made progress in the south. They’ve gone about halfway from the Jordanian border to Damascus. They are fighting both the Assad regime and the Islamic State.

Q: American goals seem to include a mix of convincing states with a stake in Syria to push parties to negotiate, to train moderate rebels in Turkey and to provide air power targeting ISIS. Is any of this working?

The administration has a goal, which is that the majority of Syrians will turn their energies to fight the Islamic State. And the Americans would prefer that Assad not be the president in Syria. They say … the way to get a new government is to have a political deal. But the strategy of getting a serious political negotiation needs tactics to make it happen. And this is why I left the administration in frustration in February 2014. We went to the Geneva peace conference in 2014 and the regime laughed us off, refused to have any kind of discussion about political negotiations. You have to put more pressure on the side that refuses to negotiate. And the Americans are doing nearly nothing to put pressure on the regime. That’s why the Saudi Arabians are angry at us, that’s why the Turks are angry at us. They’re saying we want a political deal, but they’re not doing anything to make a political deal possible.

The training program is supposed to train 5,000 fighters to fight only the Islamic State. And they’re having a lot of trouble getting any Syrians to sign up to a pledge that they would only fight the Islamic State and not Assad. Because with 220,000 casualties in this fighting, the Islamic State is responsible for killing maybe 4,000 to 5,000. The Assad regime is responsible for killing 120,000 or maybe 150,000. So if you’re a Syrian, which one looks like the bigger problem? So, not surprisingly, there are not very many Syrians signing up for this. It’s not working.

Q: Is a Shia-Sunni reconciliation a possible underpinning of peace in Syria and Iraq?

It absolutely would help, because Iran now has its clients in Syria including various pro-government militias, and it’s also sending Shia fighters, Lebanese Hezbollah … so Iran has its proxies, and the Sunni states like Turkey, Saudi Arabia and Qatar are sending in help to their clients, Sunni groups. So it is a kind of Sunni-Shia proxy war. My guess is we can’t fix the Sunni-Shia conflict without fixing the places that are in such deep contention, like Syria, like Yemen and Iraq.

Q: The humanitarian crisis has been described as the currently the worst in the world. What’s ahead for millions of displaced Syrians?

The number of refugees are now well over 3 million. And as long as the war goes on, not many at all will be able to go home. There’s no safety. The Syrian regime is dropping these barrels loaded with explosives that can bring down an entire apartment building. If there was some kind of settlement — between the mainline opposition and the government — I think some refugees would go back. But the economy is shattered. You’ve probably seen pictures of Syrian cities. It would be a huge rebuilding job, it would take decades. So a lot of those people will not have jobs to go back to, they won’t have houses to go back to, and I think it will be many years before many refugees go back into Syria. Where are their kids going to go to school? Where are they going to get clean water, food? These are huge questions. (For those living inside Syria), it’s a survival sort of thing.