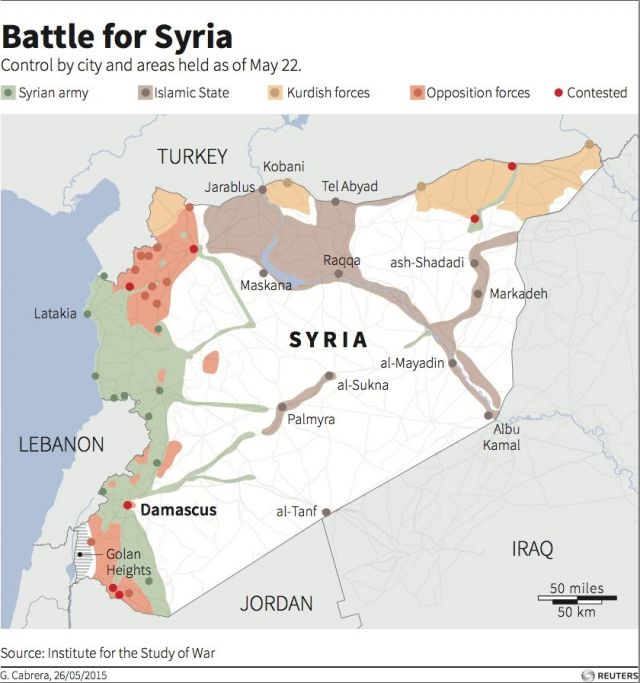 Source: Business Insider – by Jeremy Bender (Another Clear Sign Assad is Getting Desperate to Hold on in Syria)

The Syrian civil war has continued unabated into its fourth year, and the Assad regime is beginning to seriously feel the toll of the years of constant conflict.

The Syrian army has recently lost territory to rebels in the country’s northwest and to ISIS in thecountry’s center.

And now Assad is reaching out to Tehran for more than money to counter tha largely Sunni rebellion.

“Recently, the Syrian foreign minister asked Iran to send 100,000 fighters, according to the diplomat who regularly visits Syria,” Raja Abdulrahim reportsfor The Wall Street Journal. “The request was denied because Iran feared turning the conflict into an open sectarian war, he said.”

However, this concern of turning Syria into a fully sectarian struggle has not prevented Iran from sending Assad military supplies and Shia fighters in the past.

The Center for Strategic and International Studies estimates that the country’s military has shrunken to a force of only 178,000 regular soldiers from a pre-war force of 325,000.

This diminished force is augmented by an irregular force, established by Iran, that adds 80,000-strong National Defense Force as well as Iranian troops and guerrilla fighters from Tehran’s Lebanese proxy Hezbollah.

Tehran even reportedly sent hundreds of illegal Afghan immigrants to fight in Syria, often on the front lines as cannon fodder. It’s difficult to determine exactly how many Afghans have fought in Syria for the Assad regime. But Spiegel estimates that at least 700 Afghans were killed in fighting around Aleppo and Damascus alone.

The Iranian sway is showing.

The New York Times reported in late April that Hezbollah “now leads or even directs the fight in many places,” at the expense of Syrian commanders.

Also in April, Assad’s head of political security was reportedly beaten to death by a fellow top regime official, an incident that may have stemmed from a disagreement over Iran’s outsized role in the war effort.

This slow-motion collapse of the Syrian military and a reliance upon foreign support has led to an abandonment by the Syrian state of areas deemed non-vital to the continuation of the Assad regime. Largely, these forces are now based in Damascus, Homs, and the Alawite stronghold of the Syrian coast from where Assad draws most of his support.

“Of course they are overstretched and weakened. … I think they are reassessing their own strategy,” an unnamed diplomat in Syria told the WSJ. “It’s a matter of surviving. I don’t think the Syrian regime has the ability to think long term.”